I really enjoyed this Crock Pot Chinese Pork Shoulder recipe, and not only because I’m steering clear of carbs right now. The flavor of the meat and the sauce was great, and it went well served over noodles (or broccoli for me). I think it would be delicious with stir-fried vegetables, or over rice, and my husband and kids enjoyed it a few nights later in buns with barbecue sauce. Because who doesn’t like Chinese for a few nights and then barbecued pork sandwiches?

This recipe, originally from Food Network calls for Chinese five spice powder, and I almost rewrote it using substitutions, because I don’t like having to buy something when I only need a teaspoon, but I didn’t. Chinese five spice is used in a variety of recipes, so it’s not bad to have on hand, but if you want to substitute, see Sarah and Linda’s substitution suggestions below. 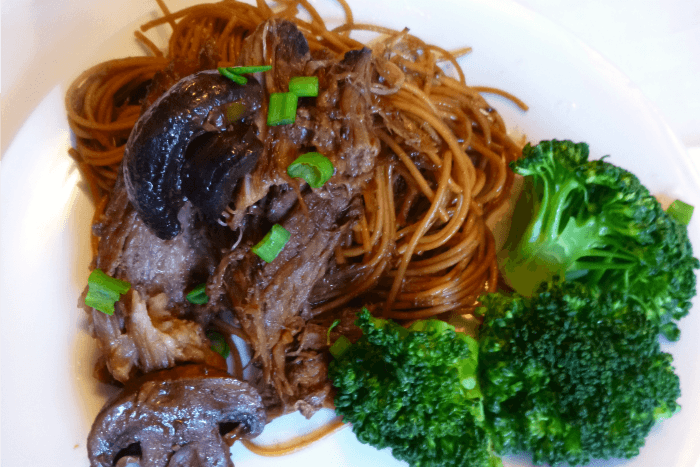 This meat cooked to perfection, and had the most phenomenal flavor. I could not find the 5 spice powder so I made my own with cinnamon, cloves, fennel, and pepper. My oil was sesame chili flavored, which gave it a good kick. I cooked mine on low for 9 hours. I will definitely make this again!

I thought the meat cooked well and it was very moist. I also made my own spice concoction with equal parts of cinnamon, cloves, fennel and pepper. I thought the cloves were a little overpowering and next time would do half as much. I served over egg noodles but next time would do rice since the sauce is so runny. I also think serving this with broccoli would be yummy.

This was simple to throw together, and made enough pork to feed our family for several nights. I used white mushrooms, cut in half, and didn't toss them out at the end because I love those little suckers. I also cooked my noodles in the sauce, because holy cow there was a ton left after it was done cooking. It was tasty, and I didn't want to waste it. I served our Chinese pork shoulder with broccoli, and I think it would have been delicious with some bok choy, too.
3.5.3226

[Tweet “This Crock Pot Chinese Pork takes 10 min to throw together and give you tons of leftovers!”]