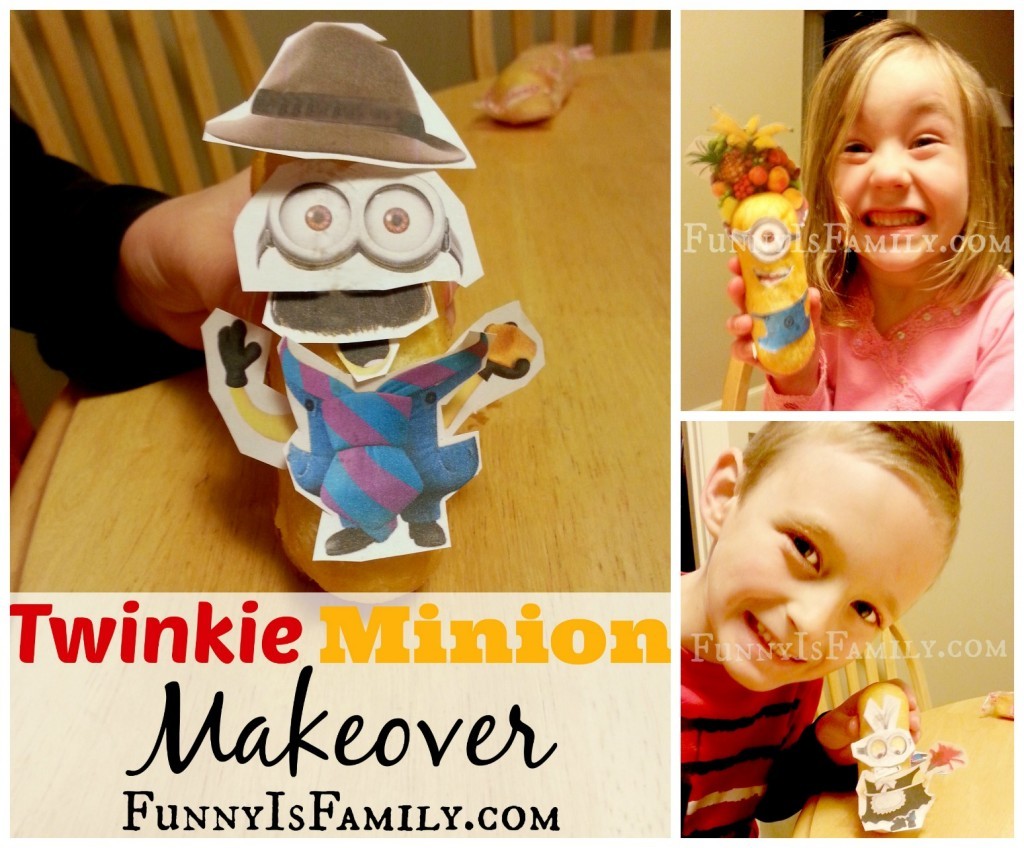 This is a sponsored post, which means I’m getting paid to eat Twinkies and make Minions.

A few months ago, I was creeping Pinterest, on the lookout for clever and inexpensive Halloween costumes for my kids, and I found some simple and adorable Minion costumes which I thought would be perfect for my six-year-old. Our whole family loves Despicable Me, and Despicable Me 2 is one of the only movies the four of us have seen in the theater together, so I knew that costume would be perfect. That was before I realized how impossible it was to find denim overalls for a boy over the age of two. I would have had better luck finding a pot of gold, which would have come in handy since that’s how much it costs for a pair of boys overalls if you can find them. We shelved the minion for Halloween idea for another year after I struck out one of the key components of the costume, with the hopes that overalls make a strong comeback, and in October, my boy happily grabbed a costume out of our dress-up bin.

In my Pinterest travels, though, I found the coolest Minions made out of Twinkies. I was annoyed that his birthday had recently passed, and I fully intend on making them for his 7th birthday. Because he will love it, and because it means I can buy Twinkies.

Well, I didn’t need to wait eight months to buy Twinkies, because Hostess and Universal Studios are teaming up to celebrate the Despicable Me 2 Blu-ray release with a Twinkie Minion makeover! They have these fun printable accessories HERE to Minion-ize your Twinkies, and if you upload the pictures, you can win daily prizes, or one fatty grand prize. (Fatty because it’s a big prize and also because it includes a year’s supply of Hostess treats, which will certainly do a number on your waistline.)

The kids cut out their chosen accessories while I started dinner, which is to say my first grader cut his out while my preschooler cried that it was too hard. I ended up taking care of hers after she carried on like I asked her to travel the Oregon Trail, or worse, to put her folded clothes away, and she happily slapped those adorable and perfectly cut pieces on herself.

If you want in on the fun, check out the details below!

Hostess and Universal Studios Celebrate the Despicable Me 2 release on Blu-ray, DVD and Digital HD with The Twinkie Minion Makeover Sweepstakes! The Limited Edition Minion Makeover Packaging hits shelves as the holiday season gets underway.

Hostess is inviting fans across the country to kick up their creativity and dress up their favorite golden, crème-filled treats and “Minion-ize” their Twinkies for the chance to win great prizes. Now through January 5, 2014, Hostess lovers can make the season a little brighter by visiting https://www.facebook.com/Hostess and https://www.Facebook.com/Hostess/app_170621563134175 to download a collection of Minion accessories, and make their own Twinkie Minion.  Fans can then upload pictures of their creations to enter to win a daily instant prize, which includes a Despicable Me 2 Blu-ray™ and special offers from Hostess, or the grand prize, which includes a Home Theater System, a collection of 30 Blu-rays and a year’s supply of Hostess treats.