My kids love to read. They bring books everywhere, and they frequently get busted for sneaking books late at night, hours after they should be asleep. My fifth grade son’s backpack is heavier than he is, and most of that weight is comprised of the books he packs to read on the bus. My third grader spends more time in the bathroom than she will in high school, because that’s where she sneaks off to read.

My eight and ten-year-old come by this honestly. Most of my memories of family vacations as a child are of the scenery passing by in my peripheral vision while my nose was crammed in a book. I read while my brother and our friends played outside, and I read long after I should have been asleep. I still read while I should be sleeping, or cleaning, or making dinner for my family.

My kids always ask for books for Christmas, and I’m happy to oblige. Here are some of the middle grade books that were either their recent favorites, or ones they have on their wish list. 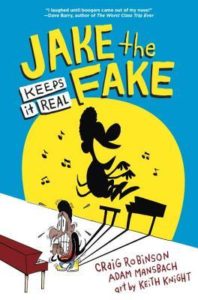 Pulling the ultimate prank Jake smooth talks his way into a gifted school for music and art students. The problem? Jake can’t draw or even play the kazoo. Now that he’s in the school he’s going to need to think of something quick before he’s found out and the last laugh is on him. Can Jake fake it till me makes it if he makes it at all?

Out of My Mind by Sharon M. Draper 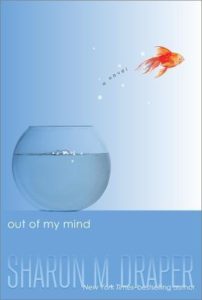 Eleven-year-old Melody is not like most people. She can’t walk. She can’t talk. She can’t write. All because she has cerebral palsy. But she also has a photographic memory; she can remember every detail of everything she has ever experienced. She’s the smartest kid in her whole school, but NO ONE knows it. Most people—her teachers, her doctors, her classmates—dismiss her as mentally challenged because she can’t tell them otherwise. But Melody refuses to be defined by her disability. And she’s determined to let everyone know it…somehow. 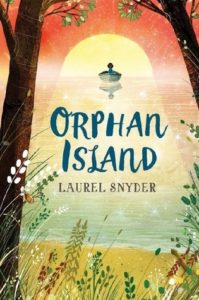 On the island everything is perfect. Nine kids inhabit a paradise and go to bed each night in their cabin with their bellies full. The only thing that changes on the island is the rotation of children once a year on Changing Day. This Changing Day Jinny’s best friend Deen is taking away on a boat and they are left with a young girl named Ess. Jinny is now the oldest kid on the island and it’s her responsibility to teach Ess to survive before the boat comes back for her next year. 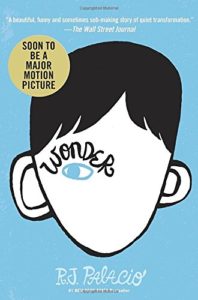 August Pullman was born with a facial difference that, up until now, has prevented him from going to a mainstream school. Starting 5th grade at Beecher Prep, he wants nothing more than to be treated as an ordinary kid—but his new classmates can’t get past Auggie’s extraordinary face. Wonder, a New York Times Bestseller and now a hit movie, begins from Auggie’s point of view, but soon switches to include his classmates, his sister, her boyfriend, and others. These perspectives converge in a portrait of one community’s struggle with empathy, compassion, and acceptance.

The Gauntlet by Karuna Riazi 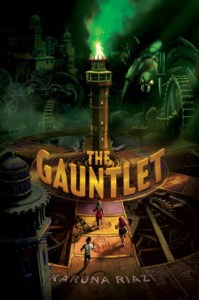 Paying homage to Jumanji three friends are transported into the board game The Gauntlet of Blood and Sand. They must work together to solve this steampunk Rubik’s cube style puzzle and get home safely. They need to defeat the architect and save Farah’s baby brother Ahmed before it’s too late. The Gauntlet races to the finish line as time runs out.

Forget Me Not by Ellie Terry 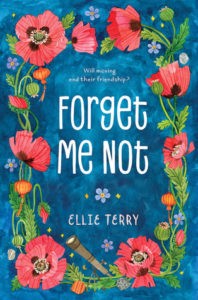 Calliope has Tourette’s and has just moved to a new school. She tries to hide her condition and make friends but it doesn’t take long for the other kids to realize she’s different leaving her no hope for friendship. Her neighbor and class president sees her for her true self. A quirky and fun kid. Will he take their friendship public at school? Just as Calliope starts to make friends her mother begins a new relationship and they may be moving again. This is a very moving novel that is making the award rounds. 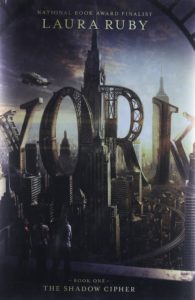 It’s been 57 years since the Morningstarr Twins built a city with unheard of tech. They also left behind a cipher. The person who cracks the cipher will receive treasure. It’s an impossible task with 57 years of losers. Another set of twins Tess and Theo live in one of the last remaining Morningstarr apartment complexes with their friend Jaime. The city is selling their home to a developer. If they want to save their apartment they’ll need to crack the cipher.

My Lame Life: Queen of the Misfits by Jen Mann 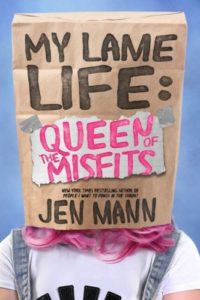 Fourteen-year-old Plum Parrish is, in her words, “weird, sarcastic, and just a lot,” and she’s pretty sure she’s invisible. Not like super power invisible, more like loser invisible. She lives with her dad whose job is transferring them to Kansas ; her s’mother who thinks journaling, cheesy inspo slogans, and mani-pedis can solve any problems; and her twin brother Pax who is so perfect Plum is convinced they share absolutely no DNA. The move to Kansas is Plum’s opportunity to reinvent herself and embrace her a lot-ness.  Along the way she’ll battle a live bat, a Queen Bee, and her unruly hair, but she will find her tribe and own who she is. 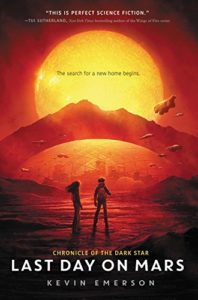 The sun has gone supernova and Earth is destroyed. Humanity has fled to Mars to quickly put together technology to travel to a distant start and make a new home. Liam and his friend Phoebe will be two of the people making the journey. Before his last day on Mars is over Liam and Phoebe will find out shocking secrets that may put the fate of humanity at great risk. 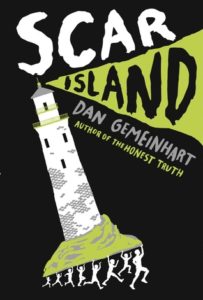 Jonathan is the newest recruit at the Slabhenge Reformatory School for Troubled boys. Slabhenge is on a rock in the middle of the ocean and there is no escape.  There’s a storm brewing and the boys are going to have to work together to find a way to survive, especially after all the adults are gone. This updated Lord of the Flies for middle graders is jam packed with action.

The Castle in the Mist by Amy Ephron 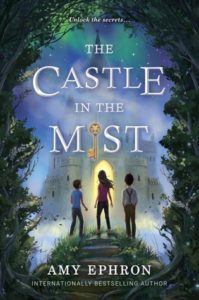 Tessa and Max are sent to the English countryside for the summer. Exploring the grounds Tessa finds a gate and an ornate brass key. Opening the gate, she finds a maze, a castle, swans, and an old-fashioned carnival where you pay for games in wishes. She also finds a boy named William and he invites her back the next day. She brings her brother Max to the castle the next day and is told to beware the Hawthorne trees. Racing against time and with only one wish left Tessa must save her family from being sucked into this world. 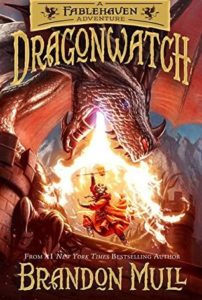 The author of Fablehaven is back with a brand-new adventure. Celebrant, King of the Dragons wants to abolish the sanctuaries and being back the time where his kind ruled the land. It’s going to take resurrecting the Order of the Dragonwatch to stop him from ruining the peace they have earned. Kendra and Seth become dragon trainers and learn skills to save the world. Will they learn enough in time to stop the chaos?

The Red Queen by Victoria Aveyard 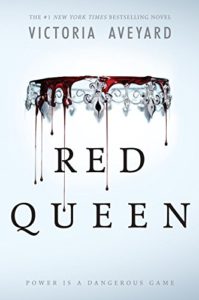 Mare Barrow’s world is divided by blood—those with common, Red blood serve the Silver-blooded elite, who are gifted with superhuman abilities. Mare is a Red, scraping by as a thief in a poor, rural village, until a twist of fate throws her in front of the Silver court. Before the king, princes, and all the nobles, she discovers she has an ability of her own. To hide this impossibility, the king forces her to act as a lost Silver princess and betroths her to one of his sons. As Mare is drawn further into the Silver world, she risks everything and uses her new position to help the Scarlet Guard—a growing Red rebellion—even as her heart tugs her in an impossible direction.

The Gravedigger’s Son by Patrick Moody 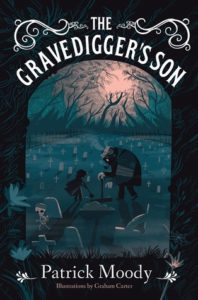 Ian doesn’t want to be a gravedigger like his father. He doesn’t want to perform the tasks that make the dead go into the graves quietly. He wants to be a healer and help the living. Just as he’s about to talk to his father regarding his dream, Ian and his friend Fiona are lured into the woods by a risen corpse and captured by a coven that wants to raise the dead. Only Ian can stop them, to do so he will have to embrace being the son of a gravedigger. 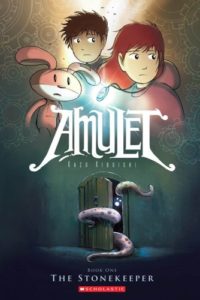 Graphic novel star Kazu Kibuishi creates a world of terrible, man-eating demons, a mechanical rabbit, a talking fox, a giant robot—and two ordinary children on a mission.  Amulet is perfect for reluctant readers who love an engaging story but are intimidated by too much text.

I’d love to hear what books the eight to twelve-year-olds in your world love! 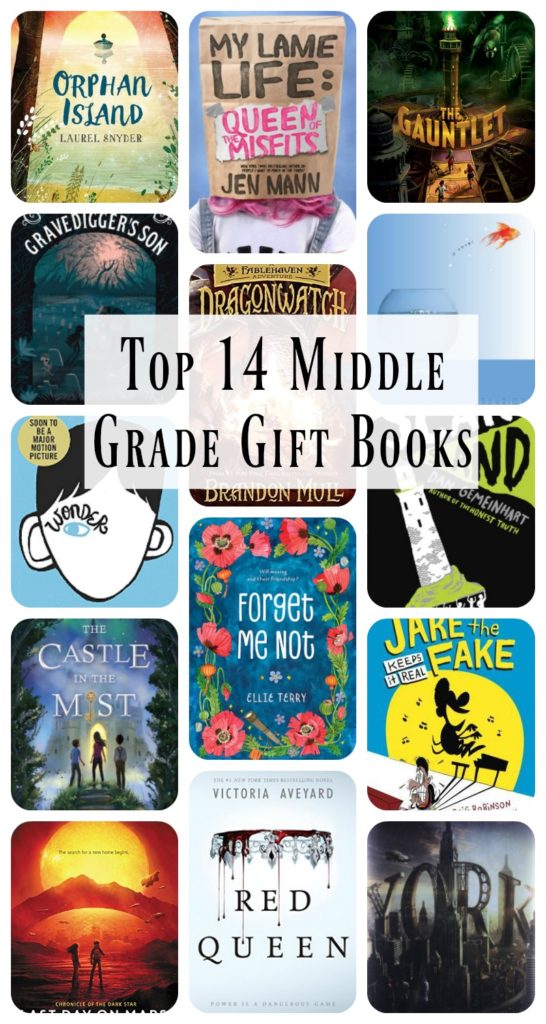