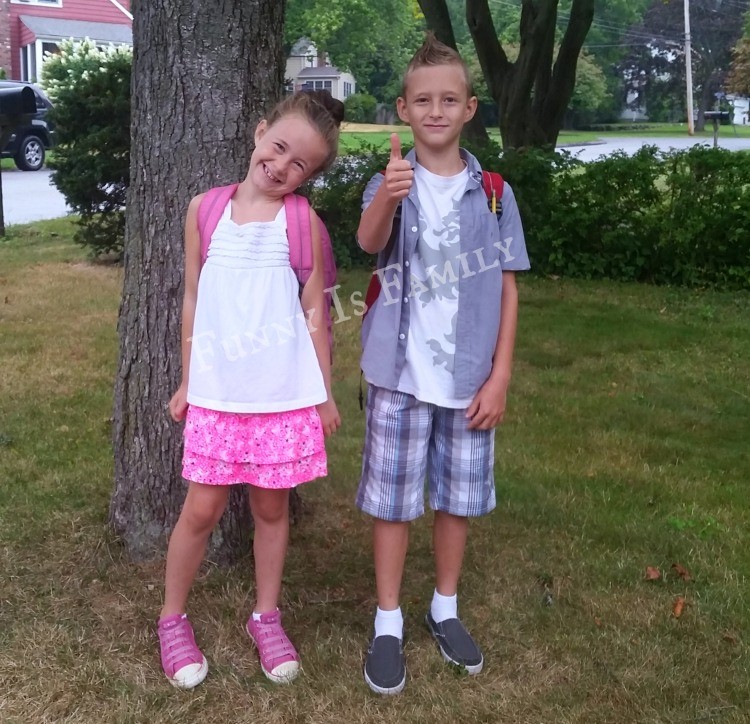 I like to think I’m levelheaded, so it always takes me by surprise when my emotions take over my better judgement. From commercials that make me cry to seemingly normal situations that cause sleep-depriving anxiety, I’m taken aback when I get knocked over by life’s regular occurrences.

The first day of school is a perfect example of something ordinary that sends me reeling. How can a situation that everyone with school-aged children experiences generate so much emotion? It’s not as though the first day of school is a surprise. It’s not like I haven’t been calling my son a 4th grader and my daughter a 2nd grader all summer long. However, the mental preparations did nothing to stop the low level of panic I felt last night as I made sandwiches for today’s lunches, wondering if our summer was full enough (it was), or if my kids were ready to tackle the next year of education (they are).

I would expect this feeling if my kids were starting a new school or getting on the bus for the first time as a kindergartner, but I still had butterflies watching them drive away this morning. On Monday, a loved one started a new school as a 2nd grader, and I thought about her all day. Today I welled up watching our neighbor head off to kindergarten while he held my daughter’s hand. The girl from Monday is doing great, and our neighbor will, too. With a few exceptions, kids enjoy school, so why has the first day of school become such a touchstone?

It’s not about school; it’s about time. Time is tricky. It’s a vast ocean of opportunity and then “Oh shit where did it go?” It’s a gift to not be wasted but also given space to breathe. “Enjoy every minute” is the battle cry of parents with grown children, a well-intentioned expression that attempts to convey a longing for earlier days, but feels like a criticism to those parents in the thick of raising young ones.

I can see both sides because I’m somewhere in between. My kids are young enough to still need me for many things and they still want me around sometimes. They are old enough to feed, bathe, and wipe themselves and can do a staggering number of chores unassisted. I remember the early years where there was not a chance in hell I could have enjoyed every moment, and let’s be honest – no one enjoys every moment – but now I hear the future knocking, the days where I won’t be the center of my kids’ world.

I have mixed emotions about that, and on the first day of school those emotions present themselves as excitement and wistfulness and too many photos. Our Facebook and Instagram feeds are full of pictures because we parents are trying to capture the anticipation of a new school year swirled together with a pinch of sadness that our kids are growing. They are taller and wiser than they were 12 months ago, proof that we’re doing our job as parents, so YAY us, but every inch on the growth chart is a reminder of time gone by. Some may look at the stiff, posed images on front steps and see new backpacks and clean sneakers, but the person behind the camera is attempting to freeze time, if only for a few minutes.