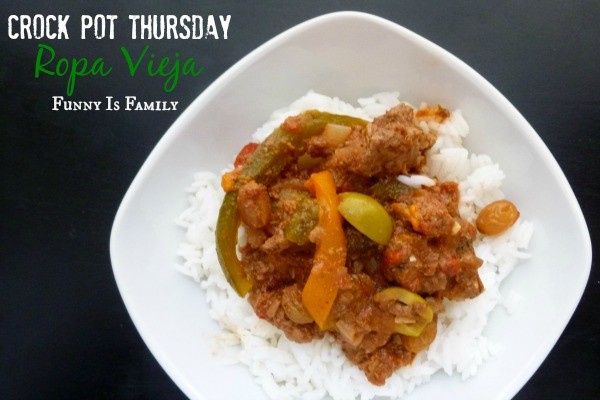 When my sister-in-law, Kim, picked this Crock Pot Ropa Vieja recipe for the week, she cautioned the rest of us, “Don’t be scared of green olives or raisins; they really add to the depth of the dish without overpowering it.” This cracked me up, because she’s probably the most adventurous of the Crock Pot Thursday crew, and she knew that without this directive, some of us might have skipped those two ingredients. Kim’s picks are almost always winners, and this time was no exception.

This is one of my very favorite things about Crock Pot Thursday. Since my mother-in-law, three sisters-in-law, and I take turns choosing our weekly recipe, we’re forced into adding some variety to our meal planning. I probably would have never tried this delicious Crock Pot Ropa Vieja were it not a Crock Pot Thursday recipe, but I’m so glad I did.

The flavors of this dish blend together beautifully. The meat had great flavor, the peppers were delicious, and the raisins and olives were such a fun addition. The sauce isn’t spicy, so the kids were happy, meaning we didn’t have much for leftovers over here. My daughter ate around the meat and my son ate around the peppers, but that’s just what they are doing these days. Almost every night, they eat the things they like, take two or three reluctant bites of the things they don’t, and then they switch plates and the other finishes it off. They look like a little old married couple, which is adorable.

This was just as good as it looks and sounds! All the levels of flavor were amazing, and the the meat was so tender and spicy. The green olives and raisins were great flavor additions. Loved it!! (And later: The leftovers we had tonight we’re even better!! The flavor really melded together!)

This has become my favorite preparation for flank steak – it’s one of the more flavorful recipes that’s come out of my crock in a while. And that’s saying a lot since we pretty much kick ass at Crock Pot Thursday picks. Don’t be afraid of the green olives or raisins – they really contribute to the depth of flavor in this dish. The whole family gladly ate this up, and the flavor is awesome the next day.

Definitely a thumbs up!

Now, I went a little off recipe because flank steak was like a million dollars a pound, so I used cube steak because I already had it. We really liked how it turned out, but if you can, use flank steak. 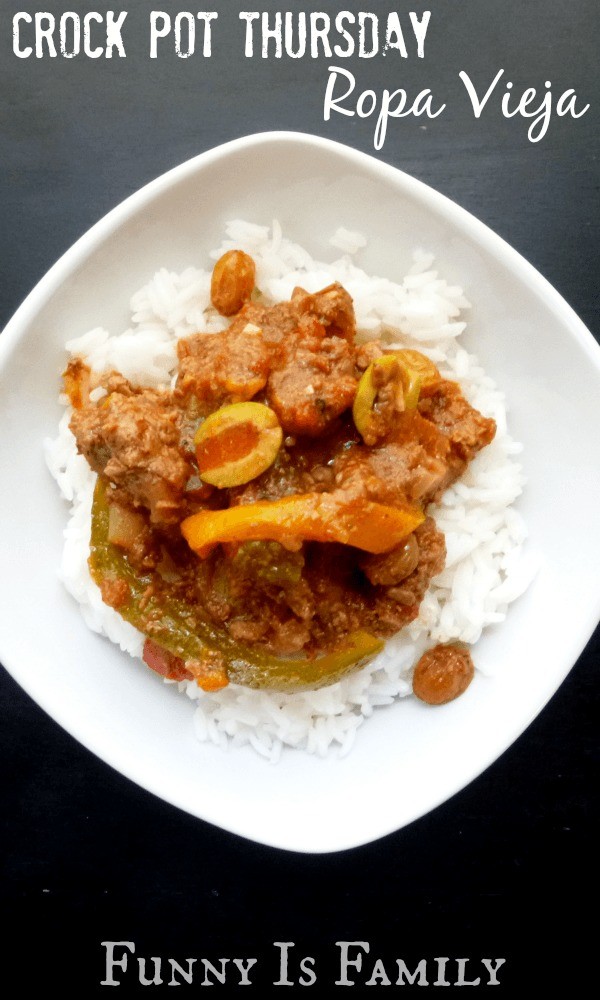