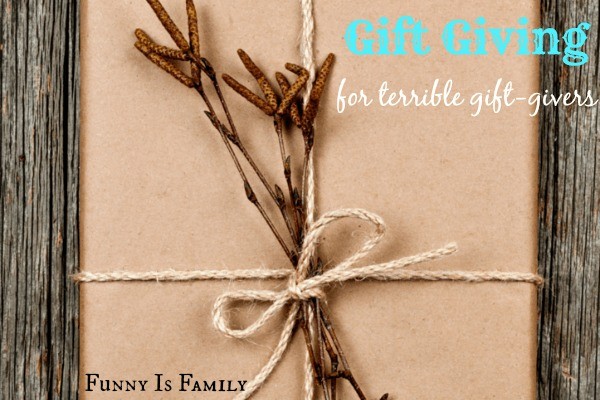 Once, I gave my husband a great gift, and by that I mean only once ever.

I’m not talking about the gift of my love, although that really should be enough to sustain him for all eternity, but he likes tools and stuff, too. The year was 2005, and we had an electrician at my work, doing something electriciany in our office. This electrician said to me, “If you don’t know what to get your husband for Christmas, this would make a great gift,” and he held up the cutest little cordless drill you ever did see. Apparently it’s actually called a pocket driver, and when I presented my husband with one for Christmas, he could not have been more confused.

“Did I tell you I wanted this?”

“How did you even know about this tool?”

“This is awesome. I don’t understand.”

It was a good gift. We both still uses it regularly, and I puff my chest out with pride every time I see it lying on the kitchen counter, because things don’t get put away around here.

That was the one and only time I successfully bought my husband a good gift.  Every other gift giving opportunity has gone one of three ways. One, he tells me exactly what to get him to ensure he gets something he likes; two, I buy something he returns; or three, (and this is the most common option these days) I make no effort to buy anything at all.

There was the fancy watch I bought him when he got his PhD that he took back saying, “My old watch is fine. Thanks, though.”

Possibly the worst gift I gave him was at least an inexpensive mistake. I needed to spend an additional $7 at Amazon to get free shipping on an order of breast milk storage bags or some other exciting mom-type purchase, so I impulse purchased him a CD visor holder for his truck to go with a long forgotten, but a surely terrible Christmas present. The CD holder was a small gift, but one I thought would be useful. He liked listening to his leaning tower of CDs, and what kind of music aficionado doesn’t like having his tunes at his fingertips in the car? I was confident it was a gift that would never be returned, except, as it turns out, if it’s given to a fella who had a cassette player in his rig, not a CD player.

We were married, you guys. I had ridden in that truck countless times. We had even joked about the cassette player when he bought the used truck, while listening to the shitty mixed tape left behind by the previous owner. I had forgotten all of that.

On Christmas morning, he opened his gift, and gave me the “Seriously?” look.  I shook with laughter as he reminded me of his vehicle’s music situation, and shook his head incredulously before tossing the CD holder to my dad, who happily used it for years.

Next week on his birthday, we’ll go out to dinner, and I’ll attempt to write him a better card than the hilarious one he gave me for my birthday. I would show it to you guys, it’s that good, but it’s terribly inappropriate. Our bank account will breathe easy in the knowledge that it won’t be pilfered for a crappy gift, and everyone is happy.

What is the best gift you’ve ever given or received? Tell me in the comments!

Get your own awesome drill!

10 thoughts on “The Best Gift I Ever Gave My Husband”