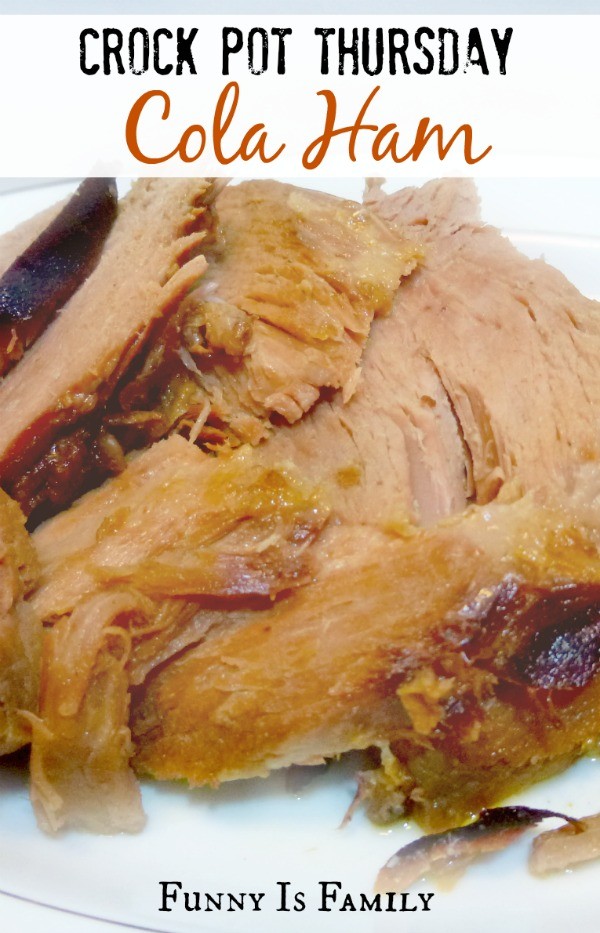 We’re big sandwich eaters around here. Almost every day, at least two of the members of our family pack a sandwich for lunch, and it’s not uncommon for my seven-year-old to whip up a sandwich for his after school snack. That kid eats almost as much as his father, and he consumes substantially more calories than I do. I don’t know how people afford to feed teenagers, since we can barely afford the bread and lunch meat that is devoured up in here.

Sometimes, to combat the hefty price of feeding my family, I slow cook a large ham, which is less expensive than deli meat. We eat it for dinner one or two nights, and slice the rest up for sandwiches.

I was skeptical of this recipe at first. I don’t love the idea of cooking with soda, but I’ve seen various versions of Crock Pot cola ham floating around the internet, and was ready to give it a go. This Crock Pot ham recipe boast only four ingredients and a five minute prep time, so who am I kidding? This is totally my kind of recipe.

And man, oh, man. I loved this ham. It was moist and flavorful, and I seriously couldn’t stop eating it. My family dug it too, which was a problem because we stuffed our faces too much and didn’t have as much meat leftover as I had planned.

It was fine, though. We rubbed our full bellies happily and planned on eating peanut butter and jelly sandwiches for the rest of the week.

I think we’ll make it again for Easter, using a spiral ham.

With ham, it's kind of hard to tell if the flavor is a result of the recipe or if it was already cooked in there... but this turned out great and was super easy! I bought a cheap boneless cut and my husband said he would eat it every day, so I guess it was pretty good. We made a baked sweet potato dish to go along with it, which was perfect.

We thought this meal was good but couldn't taste any bit of coke. I thought that this would make a nice glazed ham but really didn't. Would I make this again? Maybe, but I like the Pineapple Ham we made a while ago much better!

This was great! It was easy and the ham was unbelievably tender and moist. It made a regular chunk oh ham quite delicious.

I've always been skeptical of a recipe that calls for soda, but I'm a convert. This ham knocked our socks off, and I'll for sure make it again!
3.5.3226