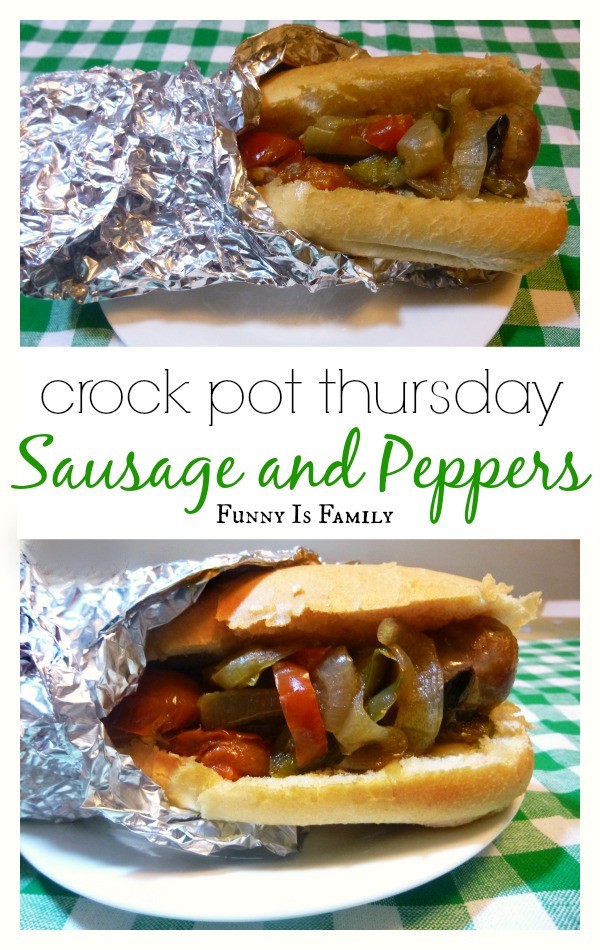 Oh, boy, you guys! These Crock Pot Sausage and Peppers are so simple, and so, so, so good! I’m a huge fan of sandwiches the size of my head, and also love me an easy recipe, and this dish was a winner on both of those fronts.

Some people like long walks on the beach; I like big ol’ sandwiches that are easy to make and messy to eat.

I did struggle with this recipe, though. I knew I wanted sausage and peppers to be served on a hoagie, but I didn’t know if I should add marinara sauce to the slow cooker? Should I leave it as simple as just sausage, peppers, and onions? What do the real Italians do? What will optimize the deliciousness of this dish? If I were eating it at the fair, how would it look?

I asked my husband, who was ready to head out the door for work. “Hey, Honey? Do you think I should throw a jar of spaghetti sauce in there?”

“I don’t know,” he answered unhelpfully. “How did they make it at that place we liked in Portland?”

Dude. How did the restaurant I can barely remember from seven years ago make the sausage and peppers that I probably never had because I would have opted for the meatball sub? Really?

“I’m doing it without the sauce,” I decided firmly.

“Okay,” he agreed in a tone that suggested he didn’t care one way or another.

He looked at me with that patented husband look, and I ignored it by asking if maybe a little bit of garlic would be good in there?

This went on for at least five minutes, when I finally committed to leaving the recipe simple and unadorned. I was prepared to dump some sauce on at the end if necessary.

It wasn’t necessary. My house smelled incredible when I got home from work that afternoon, and the sausage and peppers were great on a hoagie without any fuss. I did drip a bit of the juice from the slow cooker onto my bun, and my husband topped his with a slice of cheese and melted it in the toaster oven.

It did remind me of the kind of food you get a fair or festival, without the crowds or overpricing, and the leftovers were great tossed with some penne the following night.

I’ll definitely be making this again, and maybe this time I’ll use some sauce. Do you think I should? Or not? I just don’t know…

This was as good as the fair. I used one red, one green, one orange, and one yellow pepper. That made it really colorful, and it smelled wonderful. I did not brown the sausages, and they did brown really well on the top , but the undersides were pretty gray. That didn't seem to bother anyone at my house. I served it with ground mustard and melted cheese. Yummy!!

My family thought this was a make again for sure! I used 3 green peppers and 4 onions. I couldn't fit anymore in my crock. I browned my sausages first and would probably go that route again. I ate mine on a tortilla with horseradish and it was perfect! My husband ate it on hoagies and also thought they were great. I was surprised by the flavor these had since the recipe itself was so simple.

I loved both the simplicity and flavor of this meal. I seriously considered adding marinara to the slow cooker, but it was really good without. One of you needs to try it like that and tell me how it is!
3.5.3226