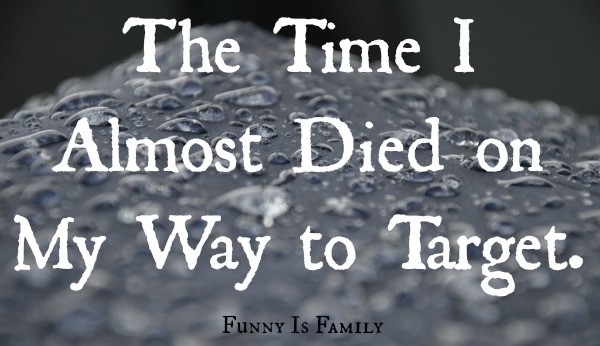 The rain that was still falling had turned the roads dark and shiny, and the rush hour traffic was hitting the brake lights pretty hard.

The wind was howling, and busily freeing leaves from their branches and the branches from their trunks. The force of the weather was whipping the thick grey clouds into swirls that my kids mistook for tornadoes.

“Hurry up and get in the car,” I barked. “Before a tree falls on us and turns us into people pancakes.” My brand of parenting that relies heavily on threats and bribes was solidly in the threat department that morning, as it often is when we’re running late.

After dropping the kids at school and retrieving all of the debris that fell out of the back seat when the kids shuffled out of the car, I turned our Rav4 south, to drop my husband at work.

On the highway, a dinosaur of a dump truck decided against exiting at the last minute, and reentered the roadway. In my lane. Where I was shaking it off along with Taylor Swift, who lives in my radio.

After goodbyes with my husband, which included three kisses, his standard and much-appreciated tush grab, and my bragging once again that I got the last of the Sausage Breakfast Casserole, I began mentally listing the errands I needed to run on this, my only day off all week.

The first was Target, even though our bank account was nearly empty and I had time to meander the aisles, a dangerous combination and one that takes will power I do not possess. I know better than to even drive by the red bullseye near the end of the pay period, but here I was, on a fool’s errand.

On my way there, I was distracted by a handsome police officer manning a construction site. I know our officers in blue are there to maintain safety, but how safe is it to put a man in uniform right next to orange cones I need to drive through?

Tearing my eyes away from Hottie McCopperson, I saw it.

My heart stopped, and a low, terrified scream escaped my lips.

On the center of my steering wheel, crawling on the Toyota logo, the symbol my kids like to point out all over town, was a spider. A very active, very furry, very close to my face, spider.

In the past few years, I have foolishly believed I had kicked my arachnophobia. I have a strong desire for my children to be free of irrational fears, so I have faked it. I have pretended that spiders aren’t scary, and I’ve proven this by killing them without blinking, by smiling while the kids set them free outside, and have even been called upon by a neighbor friend to eliminate spiders and other bugs in her home.

I thought I was cured.

I screamed, and tensed up. I was still driving, through a construction site, in the rain. I held my breath, hoping this beast with all the legs would stop effing moving and stay in place until I could pull over and burn my car to the ground.

Attached to a web, it began its descent to my leg.

As it is in times of extreme stress and danger, my body reacted. My leg lurched (thankfully it was my left leg, and not the one on my gas pedal), and my left arm dug into the pocket of my door for a tissue.

The spider fell to the floor, and I dropped the dried, crusty, snot-covered tissue on top of it.

Pulling into the Target parking lot, I flung my door open, and clamored away from the monster on the floorboard of my ride. I took a deep, shaky breath, and looked around to see if anyone was watching. Amazingly, I knew no one in the parking lot, which is almost unheard of in my smallish town full of people who need shampoo, dollar section knick knacks, and greeting cards as regularly as I do.

I wiped my damp brow, and secured the spider in the confines of the tissue, feeling brave again now that my nemesis was sufficiently defeated. I may have regressed, but my kids weren’t around to see it, and I was hopeful that this spider was alone, and there wasn’t a family of arachnids living under my seat.

I’ve come a long way from the girl who used to wake her younger brother up in the middle of the night to kill the spider in the bathroom so she could pee safely, but I guess I still have a way to go.

And that’s how I almost died, and coincidentally, how I managed to spend less than $100 at Target.

[Tweet “One mom’s harrowing experience of a spider in her car on the way to Target.”]