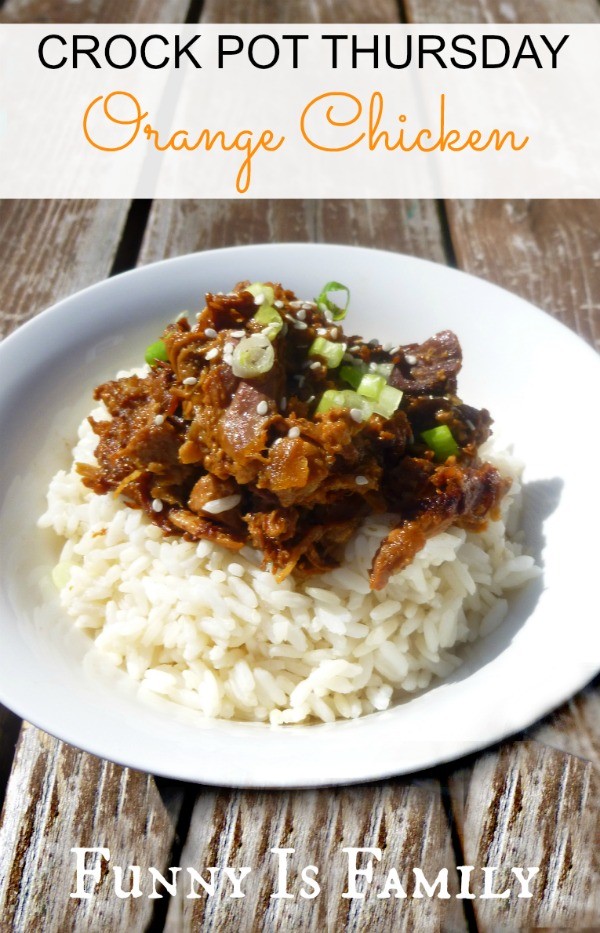 My kids love orange chicken, and I love it when they order orange chicken, because then I can sneak a bite or four. The crispy breaded chicken bites, smothered in tangy and sweet orange sauce is one of the best things Americanized Chinese food has to offer.

This is not that recipe. One day, I will take the time to batter and fry tiny chicken chunks, and mix up the thick sauce that perfectly accompanies the chicken, but today I’m making ten minute Crock Pot Orange Chicken, and serving it over rice.

The interesting thing is, it seems like more Crock Pot Thursday men liked this recipe than the women, with both my father-in-law, brother-in-law, and son loving it, while the females thought it was either too sweet, missing something, or in my five-year-old daughter’s case, “It tastes weird. Can I just have rice with soy sauce, please?”

My husband liked it, and my sister-in-law Sarah’s family thought it was yummy. See Sarah’s modifications below, because it sounds like theirs turned out the best.

This recipe could be great, and maybe I would think that it is if it had a different name, but as it is, but I will probably stick with Teriyaki Chicken or one of my favorites, Honey Garlic Chicken. Or I’ll have Sarah make it for me.

This was very easy and very good. All day as it cooked, it smelled more like barbecue chicken, not orange chicken. As I took my first bite--it was very orangey indeed!! The guys in the house loved it--I thought it was a little sweet, but that is just me probably. I started with frozen chicken breasts, and this was done easily in 5 hours on low. We served it with rice and sauteed vegetables.

I added six large dashes of Worcestershire sauce, three cloves of garlic, and four tsp ginger. I shredded my chicken, and left the lid off for the last 45 minutes of cooking. I served it as a rice bowl, with rice, then stir fry veggies, and the meat on top. My husband says it tastes sort of like orange chicken, minus the deep-fried part. My three-year-old and one-year-old approved of this meal!

This recipe is tough to review, and I think I would have liked it more if it had a different name. It's nothing like the orange chicken the kids love to get when we get Chinese food, but the flavor is decent and both my son and my husband had seconds. My daughter pretty much only ate the rice, and I liked it much more after I remembered to add green onions and sesame seeds. The green onion really added a nice touch.
3.5.3226