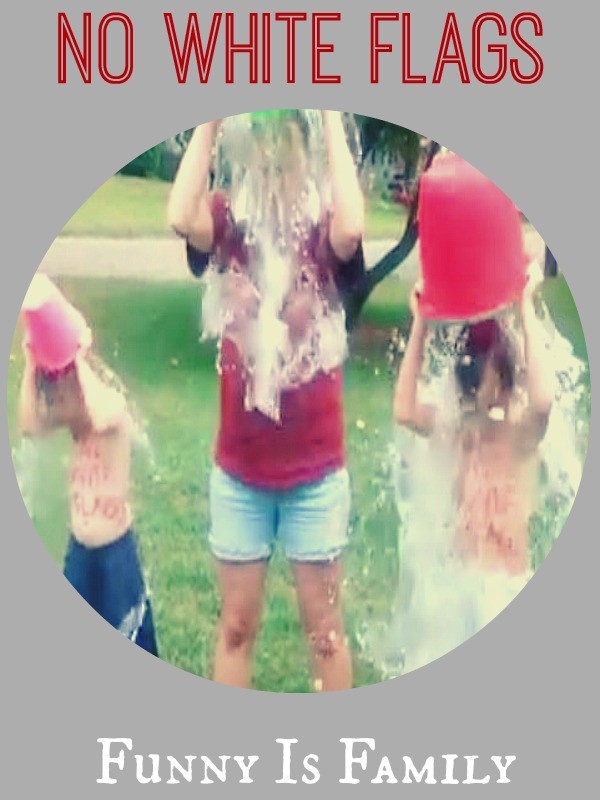 Are you weary of the Ice Bucket Challenge for ALS?

I was. No one close to me has suffered from ALS, and how many times can I watch my Facebook friends dump water on their heads before I long for the days of bra color statuses posing as breast cancer activism?

If I had ALS, would I care if a stranger soaked themselves with ice water in the name of my disease?

Would that fund research?

Would that ease my pain?

Besides, no one had nominated me, and I was starting to get a complex. Unpopular much? To make myself feel better, I like to think I wasn’t ignored, as much as I was given a pass because we were traveling. I’m sure that was it.

Thankfully, I wasn’t the only loser to be passed over by the icy masses. The hilarious Lisa Newlin has been given the cold shoulder by her Facebook friends, too. If you like to laugh, read her post, Am I A Loser Because Nobody Ice Bucket Challenged Me?

This video was the turning point for me. It gets really good at 2:03, so skip to that unless you want to watch him getting all wet and stuff.

ALS is nasty shit, and if a lighthearted, organic campaign can raise awareness and scrape up some serious cash for research, let’s all be happy about that, shall we?

There are groups of people who are less than impressed by the Ice Bucket Challenge.

Some folks are mad that money is being taken from other charities. I get that. There are a limited number of resources, and we can sometimes grow weary of giving.

Some folks are furious about the water being wasted. To me, this seems petty when we are coming out of summer, and my kids have found no shortage of water being used solely for their enjoyment. Our consumption of natural resources is a legitimate conversation, but this is not the forum for that. The amount of water used for the challenge is about the same amount that was melted in my cooler after a bbq on Wednesday.

I’m sure that pisses someone off, but no one has ever scolded me about wasting water when it’s keeping beer cold, if you know what I mean.

Some people just like to complain. They are contrary, and like to bitch about anything that seems trendy or bandwagon-like. Oftentimes, I am one of those people. I think, I’m an individual! Not a sheep! I can’t be myself and like the things other people like! Unless it’s Starbucks and chevron patterns. I love that stuff.

As someone said in the comments section of one of the many articles rallying against the horrifying situation of people dumping water on their heads, “Curmudgeons gonna curmudge.” Some people love to complain, and they themselves are the icy buckets on the heads of society, making people tense up in uncomfortableness.

Tomorrow I’ll be right there with you, rolling my eyes at the bounty of ridiculous things in our society, but for today, I join the fun. I proudly participate in a movement that has raised a crap ton of cash to fight a terrible disease, and that has caused my friends and pretty much every celebrity out there make awesomely ugly faces.

Before I show you my video, which I know you’re DYING to see, I give you this challenge by my favorite former NFL football player, which he does naked. Calm down everyone. You can’t see his frank and beans. He’s a former WSU Cougar, though, so I’m sure they look glorious.

Team Gleason is challenging you. And me. Steve Gleason’s “No White Flags” message has inspired millions, and continues to raise awareness about living with ALS and how we can help. Read more about Team Gleason HERE.

And now, the moment you’ve all been waiting for. Sorry I didn’t do it braless in a white shirt, which is how all of the YouTube videos suggest it should be done. Seriously, there’s so much nip over there.

Before you hit play, take a look at my face. Why is it like that? If you know me in real life, do I make that face often? I look like I’m getting ready to do my Elvis impression.

This is why I don’t vlog, you guys.

[Tweet “One Ice Bucket Challenge skeptic gets on board, because ALS can suck it. #NoWhiteFlags”]

8 thoughts on “No White Flags”