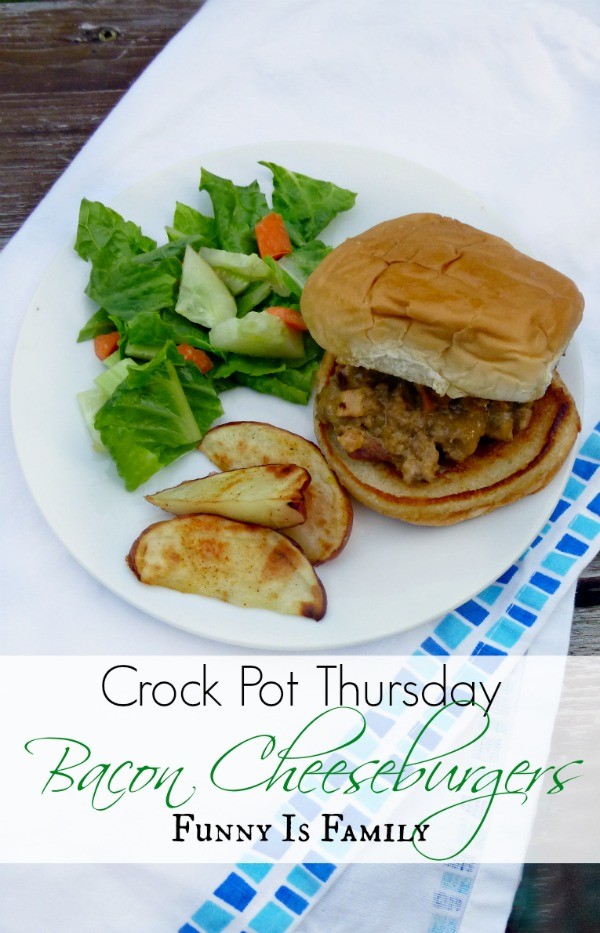 You guys should have seen my husband’s face when I told him this week’s Crock Pot Thursday pick was Crock Pot Bacon Cheeseburgers. He was like, “You can’t make cheeseburgers in the Crock Pot!” He’s kind of right. Technically, these aren’t your traditional bacon cheeseburger, they’re more like a Sloppy Joe, which I love, by the way.

He became a believer when two little burgers of deliciousness landed on his plate, though.

These bad boys aren’t fancy. They are quick, and easy, and can also be made on the stovetop. I threw ours together before heading to the library, and they were ready to go when we got home.

Since we’re coming up on a holiday weekend, may I suggest you double the cheese, and make this deliciousness into a dip? And then invite me over, please?

It's hard to beat a good cheeseburger in my book. That's why I was excited to try this one. It's not what I call a "classic" crockpot recipe... In fact, one could argue that the slow cooker isn't needed at all. But this was oh so yummy. Kind of like sloppy joes, but tastes like a bacon cheeseburger. And it holds together better when you eat it. We used really soft, slightly sweet brioche rolls which complimented the meat perfectly. Will make again!

This was a hit at our house, and it would have lasted for three full dinners if I hadn't eaten so much of it with a spoon right out of the Crock Pot. If you really want to impress your family and screw your diet, butter the insides of the buns and brown them on a hot skillet for a few minutes before heaping the good stuff on top.

[Tweet “Bacon Cheeseburgers in the Crock Pot? Oh, yes you can!”]