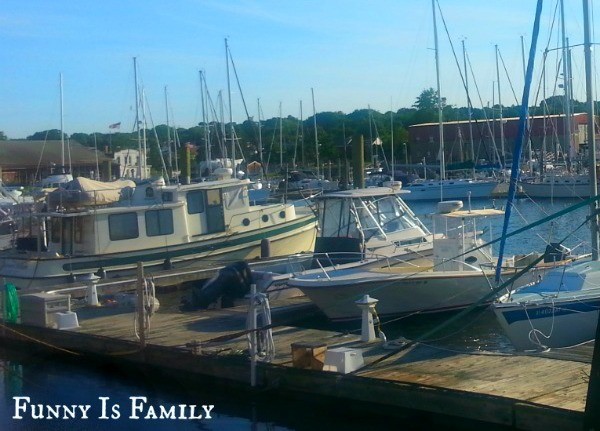 If I would have counted the number of people in line, I may not have readily become its caboose.

It was long, but we were hungry, and it was Father’s Day. My husband, the only father in our group, wanted clam chowder, and we’d heard good things about this place. So had every person in the entire state, I guess.

Everyone else in line was sipping a cold one. The pinched woman two spaces up was drinking white wine from a plastic cup, and the group in front of her had deliciously cold beers. As far as I could tell, we were the only people in line who didn’t know to BYOB. The lady in front of us was at least prepared with a book to bury her nose in, a novel she would probably finish in this long-ass queue.

We didn’t come completely unprepared, though. My mom was with us, and grandmothers are great for distracting restless and hungry children. My husband and I settled in to the line, while mom wandered off to the water with the kids, to look at boats that cost more than our house, and to admire the swans that would soon be nipping at my kids’ fingers.

I quietly celebrated when a large group stood behind us. We weren’t last anymore! Someone else was dumb enough to wait an hour for fish and chips! They were prepared with a sixer of some kind of alcopops, maybe Mike’s Hard Lemonade or Bacardi Breezers or something? All of that stuff looks like Boone’s Farm to me.

My skin was sizzling. Was the temperature in line hotter than a few feet away? I stepped out of line to see, but my hunger was distracting, and my experiment unsuccessful. I had a warm water bottle in the car, but what was it I had recently heard about plastic water bottles in cars? They cause cancer or stunt growth or turn people into Miley Cyrus fans or something?

I could wait. I’d buy some non-Miley water when we ordered. And by water I really mean a soda.

Some of them had brought tablecloths and wine glasses, artisan cheeses were being pulled from festive picnic baskets, and crackers were nibbled on while orders were being secured.

We were peasants watching the royals feast. Peasants with only 4% battery life on our phones.

While I was almost dying of hunger and boredom, my five-year-old was speaking duck. Or trying to, anyway, in an attempt to communicate with a mama duck and her ducklings. In the same way Americans struggle with those who don’t speak English, my daughter quacked louder, and even louder still, certain that if she raised her voice, the duck would finally understand.

Watching from afar, I dreamed of my hot car water.

Halfway through the line, a couple in the group behind us started fighting. She didn’t like his expression when she asked him to hold her phone for a second, and all hell broke loose. Without turning around, I listened gleefully. Finally! Something interesting to pass the time! I’m not sure her baby daddy deserved all the “Fuck yous” she was hurling his way, especially on Father’s Day, but whatever. I’ll bet not as many people would have died on the Oregon Trail if there would have been more ridiculous bickering between couples in line for oysters on the half shell.

The drama rejuvenated me.

And then, without any of us passing out from hunger or thirst, it was time. It was our turn, and I stood smugly, knowing my husband and I had finally seen the “for worse” we had vowed to work through on our wedding day. Pretty soon we’d be balancing huge trays of food to the picnic table my mom had been saving for an hour, and we’d be solidly back on “for better” ground.

8 thoughts on “The Line”