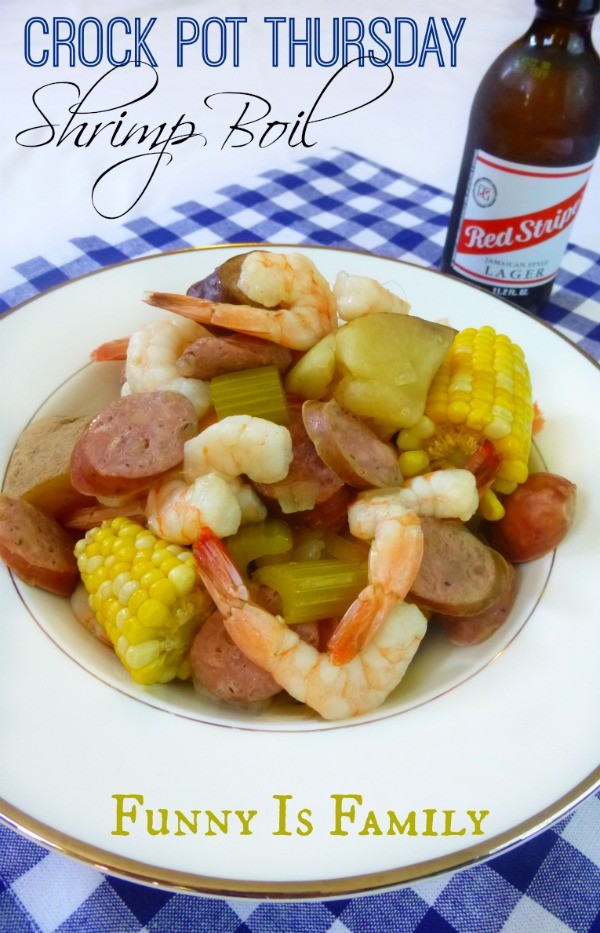 When my sister-in-law, Sarah, chose this recipe, she begged, “Don’t hate me!” This plea was valid, as we are a lazy bunch, and dislike Crock Pot Thursday recipes that include multiple steps. This one does, but man, oh man, was it worth it. My husband declared that this crockpot shrimp boil might be his all-time favorite Crockpot recipe, and with over 100 slow-cooked recipes under our belt, that is a bold statement.

A bold statement, for a bold dish. This was a little too spicy for the kids, but I wouldn’t modify the spice for them, because it’s perfect. Just do what Sarah did: make sure the kids have tons of water nearby, and dig in!

This is a great dish for a party, and also goes great with a few beers. I’d be happy to come over and help you eat it. I’ll bring a loaf of crusty bread.

It makes a ton, so use your largest slow cooker. Mine was almost overflowing by the time I got everything in it.

This was a delicious way to have a shrimp boil!! There was too much liquid in my crockpot to add the sausage and corn later with the potatoes. I scooped out about 1 quart and used that liquid to boil the shrimp in the very end. This turned out perfect, and all the spicy flavor was so good for a summer dinner!

We began our love in a good Shrimp Boil when we moved to Texas and met some friends from Mississippi. They knew exactly how to make it and every bit of it was awesome! Was this that good? No. But it was darn darn tasty! I thought it could use an even spicier kick but this was perfect for my children which is an important part of any dinner. I did add half a lemon (sliced) to mine because that is one of my favorite flavors and then squeezed two slices over the top after I had everything pulled out. I would totally 100% make this again!

My husband and I loved this dish, and the kids picked out the things they liked. For my 5-year-old daughter, that was shrimp and corn, and for my 7-year-old son, it was sausage and corn. This makes a ton of food, and I had a hard time getting the shrimp in the Crock Pot without it overflowing. It was totally worth the extra effort to make this meal, and it is going into the Crock Pot Thursday Hall of Fame.
3.5.3226

[Tweet “Make this Slow-Cooker Shrimp Boil, and invite me over!”]