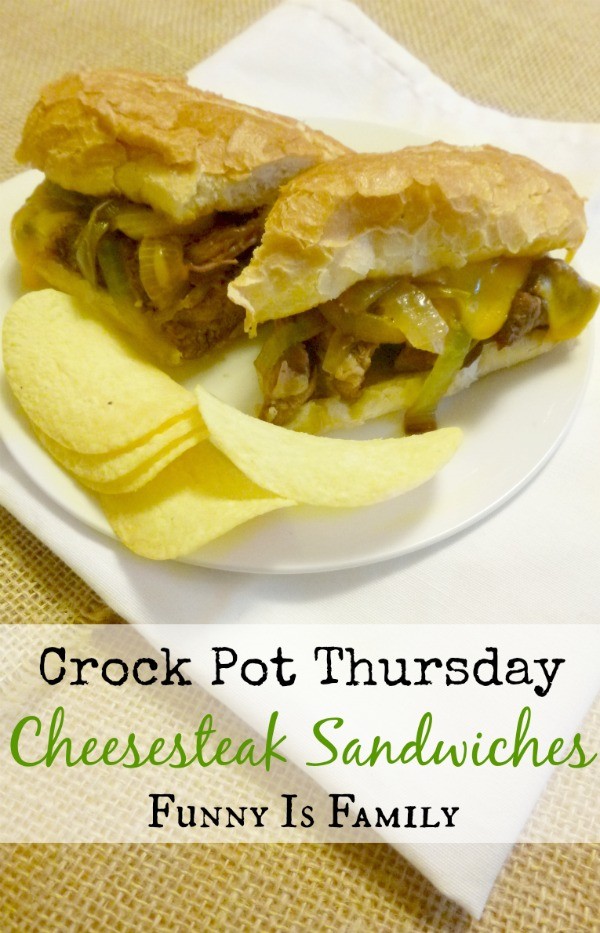 Two weeks in a row of sandwiches? I know, but we’re crazy like that.

When my in-laws were visiting last month, we toyed with the idea of making a day trip to Philadelphia. My husband and I were down there with the kids for a few hours back in October, but all we did was see the Liberty Bell through a window and grab a sandwich. We were just passing through, and it was during the government shutdown so all of the other touristy stuff was closed.

We obviously need to make it to Philadelphia again, and not just to eat another cheesesteak sandwich. I mean, mostly, but we want to see the historical bit, too.

Because we ended up staying in Connecticut, we didn’t get our sammiches, and we needed to make some Phillys. The Crock Pot Thursday crew was on it. Now this recipe is obviously not as good as the delicious gut-bombs you can get from an expert steak sandwicher in Pennsylvania, but they’re good. All of that Philly talk got me itching for a cheesesteak, and this meal scratched that itch. Mostly.

You are going to balk at the number of onions in this recipe, but don’t be scared.

Our family loved this recipe. Cutting up four onions was a tough but it was totally worth it! I used a London Broil and it worked great, I used 1 red and 1 green pepper because that is what I had and 2 scoops of garlic and it was yummy! This made about 10 sandwiches which is great because it is so good you will want to keep eating them!

All of us thought this was really tasty. It may not match the original Philly Steak Sandwiches--but it was very good. While cutting up four onions, I about cried my eyes out, but I can see why there were that many needed for the flavor, It was easy and satisfying, and made about eight big sandwiches. We will make this again.

When I saw FOUR large onions in this recipe, I thought it was nutty. I used two large onions, and called it good. As it turns out, four would have been fine, and according to Sarah and Linda's comments, I should have stuck with the recipe and used all four. I thought the mixture needed a little salt and pepper before serving so I added a dash or two to it before slapping on the cheese.
3.5.3226