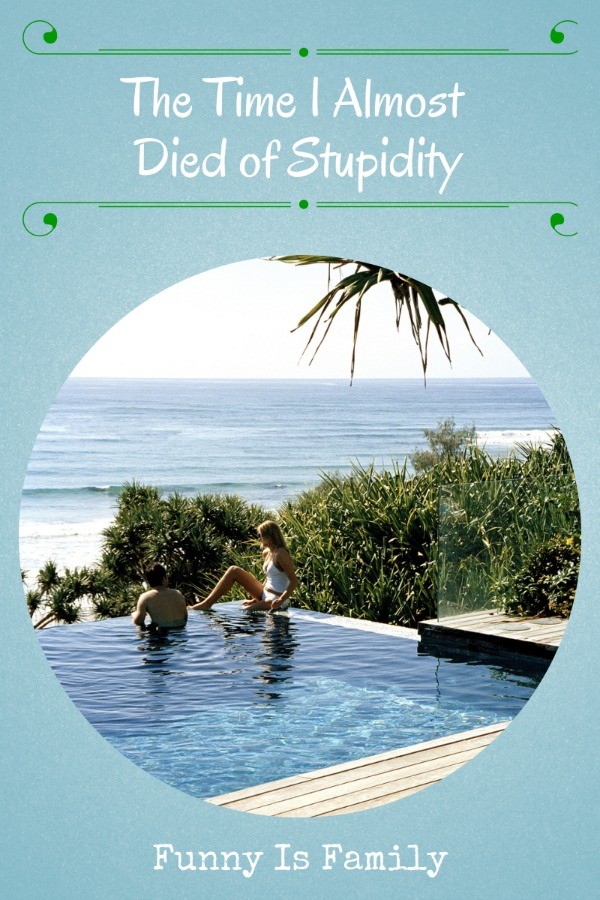 In 1991, my happy place was my grandparents’ swimming pool. That summer, when I was no longer a middle schooler, but not yet a high schooler, I spent most of my free time there. This was before I hated swimming pools, a result of teaching swimming lessons, lifeguarding, and competing on the swim team, a trifecta that sometimes kept me at the public pool for 15 hours a day.

That burnout wouldn’t happen for a few years, and for now I still loved swimming. For a bit, my family lived with my grandparents, and when we did, early summer was the best. I would start my day with a swim, and enjoy my coffee and newspaper in the sunshine while my post-shower hair dried. After school, friends always wanted to come swim and I was mad popular in that month or so between when the pool was opened for the season and when school let out for summer break.

On this particular day, I was swimming alone. My best friend, Amanda, and I talked on the phone most waking moments when we weren’t together, so it was only a matter of time before she would be calling.  We were close in the way girls can be at that age, sharing pre-chewed gum, picking food out of each other’s braces, and never, ever getting tired of each other.

Amanda and I talked about anything and everything, but boys, gossiping about our friends, and Matlock dominated much of our conversation. We loved the shit out of that courtroom drama and never tired of seeing Andy Griffith eviscerate someone on the stand with his bumbling ways and southern charm.

The phone rang while I was splashing around and since there was an outside phone, I heard it and jumped out of the water to answer it. It was Amanda, of course, and we jabbered long enough for my skin to begin to crackle from heat, tempting me to jump back in the water.

Getting off the phone wasn’t an option, but that was fine. The phone had a crazy long cord, so I hauled that old, yellowing rotary phone to the side of the pool. Holding the receiver in the crook of my neck, I carefully eased myself into the water and propped my elbows on the edge to continue discussing the names of our future children. I liked Kirby, and while I had graduated to different names by the time my for realsies kids rolled around, my high school Home Economic flour sack baby would be named Kirby Michael. He was such a good boy.

While Amanda switched topics to a pair of white Bongo jean shorts she had her eye on at The Bon Marche, a pair she would eventually convince me to go halfsies on with her even though we didn’t wear the same size and she kept them at her house for me to “borrow whenever I wanted,” my mind started to wander.

“I wonder what my voice would sound like through the phone if I was underwater?” I thought.

Without considering the possible consequences or discussing it with my bestie who was on the phone right that very second, I did it. I completely submerged myself in a full-sized swimming pool with a telephone still attached to my ear.

While I was home alone.

Amanda says I made a groaning-type gurgling sound, in case you were wondering what a teenage girl sounds like when she’s electrocuting herself. It was a shock, but I wasn’t completely immobilized, so I immediately popped my head back out of the water. Miraculously, the phone wasn’t dead, and neither was I.

It took me a moment to compose myself and explain what I had done, on purpose, and while I couldn’t see her expression, I assume it resembled the incredulous faces of everyone else who heard the story. She probably didn’t appear as disappointed or as fearful for my future as my dad would look when I told him, but she didn’t need to worry about my living at home forever because I was just too dim to make it as an adult.

In my defense, I have seen warnings on countless hair dryers regarding submerging them in water, but never once have I see that warning on an old rotary phone.

How could I have know that would happen?

[Tweet “Swimming while being an idiot. A cautionary tale.”]

9 thoughts on “The Time I Almost Died of Stupidity”