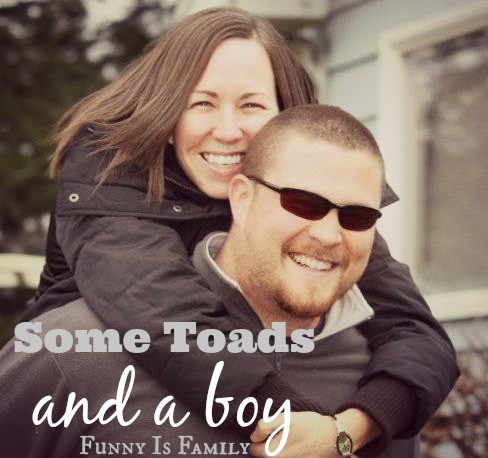 Once upon a time, there was a girl. Not a princess, just a girl. It’s a good thing this girl wasn’t born into royalty, as her manners were lacking, her demeanor incredibly unrefined, and most importantly, she hated wearing dresses. No one would mistake this girl for a princess, but she did kiss some toads.

There was another toad who complained when the girl wanted to go to the movies, as the town with a movie theater had stoplights, and he didn’t like going into “the city.”

There was the toad who thought it was disgusting when the girl would sneak a few fries from the fast food bag while pulling away from the drive-thru, saying with scorn, “Only pigs can’t wait ten minutes to eat.” The girl kept eating the fries, but also kept the toad much longer than she should have.

Or the one she dated her freshman year of high school who would make the girl change her outfit if he didn’t like what she was wearing. She tolerated this for a short period of time because this toad had a car.

One day, the girl met a boy. Now, many of the toads looked like boys in the beginning, but turned into toads later. Others looked like toads from the get go, but they were cute toads, so what the hell?

This boy would maybe turn into a toad, but she didn’t think so, and besides, he was irresistibly adorable. The girl was happy to take the chance. The girl was graduating from college soon, and as long as she got her degree, she had a job waiting for her. Her main priority was having as much fun before entering the real world as possible, and the boy looked like fun. Lots of fun.

Fun was had. So much of the fun. While the girl was skipping class to hang out with the boy, she quickly fell in love. Within two weeks, after too many pitchers of mystery beer, the girl declared her love for the boy, right before she puked in a garbage can.

The boy, looking more and more like a prince, held the girl’s hair, rubbed her back, and suggested that maybe they have the love discussion later. True to his word, he pulled her aside a few days later, and soberly declared his love, too.

Two weeks after that, the girl graduated and moved five hours away to start the stupid job that she now hated because it kept her away from the boy.

The girl and boy spent the next year making the ten-hour, round-trip drive every week to visit each other, putting the hurt on the boy’s mom’s gas card. Parents: If you give your college kids a gas card, save yourself some serious coin and put in a clause about long-distance relationships.

The boy never turned into a toad. He would occasionally display toad-like tenancies, but so would the girl, and that’s just life.

The boy and girl got married, and had a son who hops like crazy, but is more prince-like than toad-like. Two years later, they created a girl, who truly believes she is a princess, dresses and all.

And they all lived happily ever after.

34 thoughts on “Some Toads and a Boy: A Love Story”