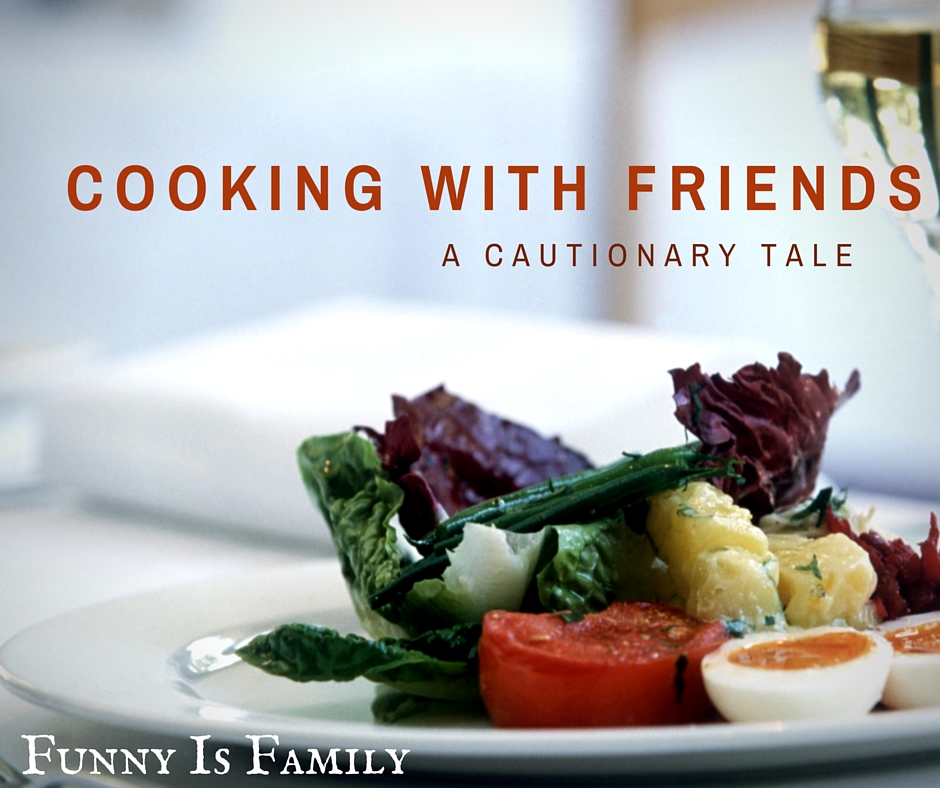 Not to brag, but I’m a pretty decent cook. I can make pie crust, I can bake cookies, and I am well on my way to becoming a Crock Pot master. I feel comfortable changing a recipe, and I substitute ingredients with confidence. That’s not to say I don’t fall short on occasion, but for the most part, I skillfully feed my family.

This has not always been the case. In high school I could prepare a few meals without poisoning anyone, but truly the credit of those dishes should go to Kraft, Campbell’s, and the TV dinner folks. The only thing I could do really well in the kitchen was flip an egg perfectly over easy.

In college, I ate dining hall food for one year, and sorority food for the next two. My senior year, I finally lived in an apartment and was responsible for my own cooking.

It was going to be awesome. I could make whatever I wanted at any time, even if it was a whole plate of corn dogs at 2 am. And if I wanted to fall asleep with my face in a plate of mustard, I could do that, too! My friend Kevin and I quickly fell into a routine, and made teriyaki chicken every single night, usually with a side of Rice A Roni, and sometimes a frozen vegetable. Kevin lived next door, but he ate with us frequently, and he was the grill man.

All of the apartments in our complex looked the same. They boasted generic white walls and light carpet, floors so thin it sounded like your size zero upstairs neighbor was actually a rhinoceros in wedge sandals, a balcony that was just large enough to hold a tiny hibachi grill and a lawn chair that appeared after a night of one too many pitchers of mystery beer. The kitchen was the size of a coffin.

Every once in awhile, my roommates and I would try to recreate a favorite meal from back home. Our attempt at spaghetti was fairly successful, and once we even made an entire Thanksgiving meal, which almost didn’t happen when my roommate Mandy, while being walked through preparing the turkey by her mom on the phone, was directed to remove the giblets bag. “You want me to stick my hand up where?”

Kevin and I not only prepared our meals together, we also did most of our grocery shopping together. One fateful trip, we purchased a five pound log of ground beef. It was on sale, and we are carnivores. It was a no-brainer, really.

We brought our log-o-beef home and tossed it in the freezer to be used later, patting ourselves on the back for being so planful and prepared. As we marinated our teriyaki chicken and discussed how wasted we were going to get later, we marveled at how grown-up we were becoming.

A few weeks later, Mandy wanted to make tater tot casserole. If you are unfamiliar with this dish, it calls for ground beef, cream of mushroom soup, some other stuff, and a layer of tater tots on top. It looks like dog food, and tastes like heaven. We planned on serving it on White Trash Paper Day, the day of the week where we small town kids got our weekly hometown newspapers in the mail. Tater tot casserole, in all of its low brow glory, is the perfect meal to enjoy while reading our local police logs full of noise complaints, unlicensed dogs, and the occasional drunk and disorderly.

We dug our beef out of the freezer, and realized we had made a fatal error by not separating the meat before freezing it. Not only did we not need an entire submarine of cow for our casserole, but it would take days for it to defrost since it was so ginormous. It was already Wednesday, White Trash Paper Day, and we needed meat, stat!

Luckily, our other roommate, Blythe, had a toolbox. We would just use it to chisel some hamburger off the log, and pop the rest back in the freezer. No big deal. Except that after the whole Jack-in-the-Box e coli disaster that sickened many and even resulted in a few fatalities, Blythe was steering clear of hamburger. She wasn’t going to sign off on us rubbing ground beef all over her tools.

“Hey, Bly?” Mandy called sweetly from the kitchen. “Can we borrow your tools?” Since she had no idea what we were up to, she gave us the okay, just like always. Her dad was the only one who thought to send his baby girl off to college with some tools, so we borrowed them frequently.

Using a flathead screwdriver as a chisel, we took turns whacking it with a hammer, and sending bits of ground beef flying in every direction. We had just about massacred enough meat off of the log when Blythe entered the kitchen, witnessing the way we were spreading raw beef all over her hammer, screwdriver, and really, all 12 square feet of the kitchen.

All four of us froze. Then three of us started laughing. Hard. Doubled over, still picking particles of cow off of our clothing, we apologized with sincerity barely evident through our hysterics. When we had settled down, we cleaned the kitchen, sanitized the tools, and Mandy whipped up her tater tot casserole*, which tasted like love and home, and not at all like disorganization and metal.

I wish this was the shittiest roommate stunt I pulled, but it wasn’t. It was, however, the last time I froze hamburger without separating it first. It may have also been the last time Blythe let us use her tools.

*Not Mandy’s beefy recipe, but a crock pot one using chicken. I’ve never chiseled chicken, so you should just defrost it like a normal person.

15 thoughts on “My Roommate’s Tools and a Kitchen Disaster”