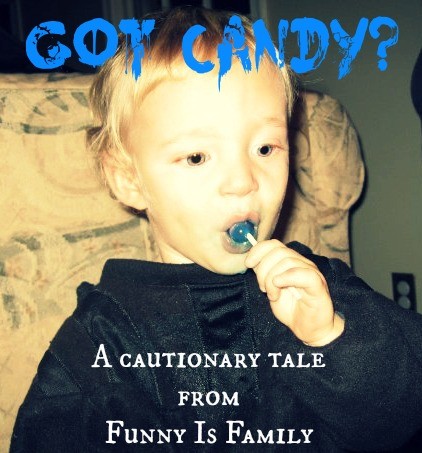 Do you worry about running out of food when you’re hosting a party? Do you imagine that everyone will arrive starving, and planning for that situation, end up with days worth of leftovers, eating pigs-in-a-blanket and chips and dip for breakfast the entire next week?

I do this with Halloween candy. This year I bought two huge bags of candy, waited until Tuesday to allow that candy in my house for fear we would gobble $20 worth of chocolatey goodness before the first trick-or-treater rang our doorbell, and I’ve been fighting Halloween candy anxiety ever since.

Is only two bags enough?

What if we run out?

Will my house get egged?

I don’t need my house to look any shabbier than it already does.

There is some history behind my Halloween candy stress. When I was fifteen, we celebrated our first Halloween in a house that was one block from a house we had lived in a few years prior. That first house got a small handful of trick-or-treaters. The new house must have been in some sort of Halloween vortex, because despite having plenty on hand, we ran out of candy. While my mom made an emergency run to the grocery store three blocks away, we desperately scrounged for treats. Quarters worked for a bit, but no one was thrilled about receiving money. Those kids would have been happy with their coins if they knew the children behind them were going to get cereal.

That’s right. We had a big variety pack of those individual cereal boxes leftover from our August rafting trip, and after we ran out of quarters, we handed those sumbitches out. As it is with variety packs, the popular cereals were gone, leaving only Cheerios.

“Regular or Honey Nut?” I would ask, begging them with my eyes to not smash our pumpkins.

“Honey Nut,” was the disheartened reply, as the kids looked to their parents, wondering if they needed to say thank you or if a steaming pile of dog poo would be a better gesture of their appreciation. They did say thanks, with as much enthusiasm as they had used when making their heart-healthy grains choice. 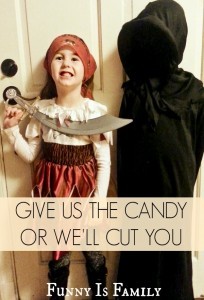 Luckily, Mom returned before I had to give out any regular Cheerios, and the following year the number of trick-or-treaters we saw markedly decreased. Weird.

Five years ago, when we moved into our current house, we again underestimated the number of trick-or-treaters. Another emergency trip to the store was needed, but that year, our one-year-old son forfeited his recently acquired haul and we regifted his candy while he happily gnawed on a lollipop. No spare change or cereal for our new neighbors, no siree.

So this year, if your child gets healthy breakfast foods or money in lieu of candy, know this: I don’t think your kid is fat. I just ate too much candy before the 31st, and we ran out. Again.