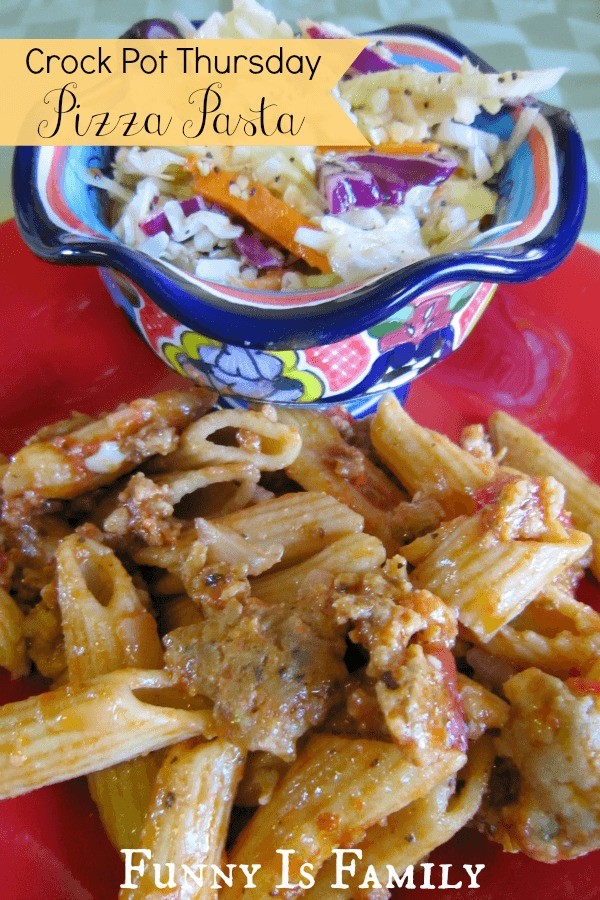 Several years back, we received a family cookbook for Christmas. In it was my husband’s family’s favorite dishes, with a handful of entries from each of us. This Crock Pot Pizza Pasta is one of the recipes, and until recently, I had never made it. For some reason, I thought it had pepperoni in it, and that seemed weird to me, which is dumb, because I love pepperoni. Don’t dismiss it like I did, and add pepperoni if you want to. Recipes are made to be modified!

Last week we were at my husband’s parent’s home. I love being with my in-laws for Crock Pot Thursday, when we can actually share the meal that we all would normally be eating in different parts of the country. This recipe was originally written for the oven, so if you aren’t feeling the slow cooker on this one, pop it in the oven at 350 degrees until the cheese is melted (about 30 minutes.) 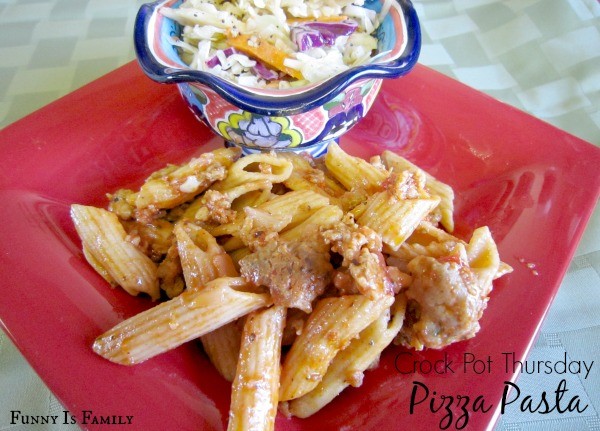 2. Add garlic and onion and cook until soft. Drain off grease, but not all of it if you’re naughty like me.

3. Add tomatoes, tomato sauce, basil, and oregano to pan. Bring to a boil and simmer 15 minutes.

4. Cook pasta about 3/4 the amount of time called for on the box. Drain. You want the noodles very al dente as they’ll soften in the slow cooker.

5. Layer half the noodles in the bottom of the slow cooker.

6. Add half the sausage/sauce mixture.

7. Top with half the cheese.

8. Repeat with the other half of the ingredients.

9. Cover and cook on low for two hours, or until the cheese is melted.

We all really liked this recipe, which I know because I watched everyone scarf it down before I went back for seconds. It was just as good three hours later when I had another plate of it before bed.
This is a great meal to slow cook for company. You can prepare it, clean up the mess and get ready for your guests while the meal finishes cooking.