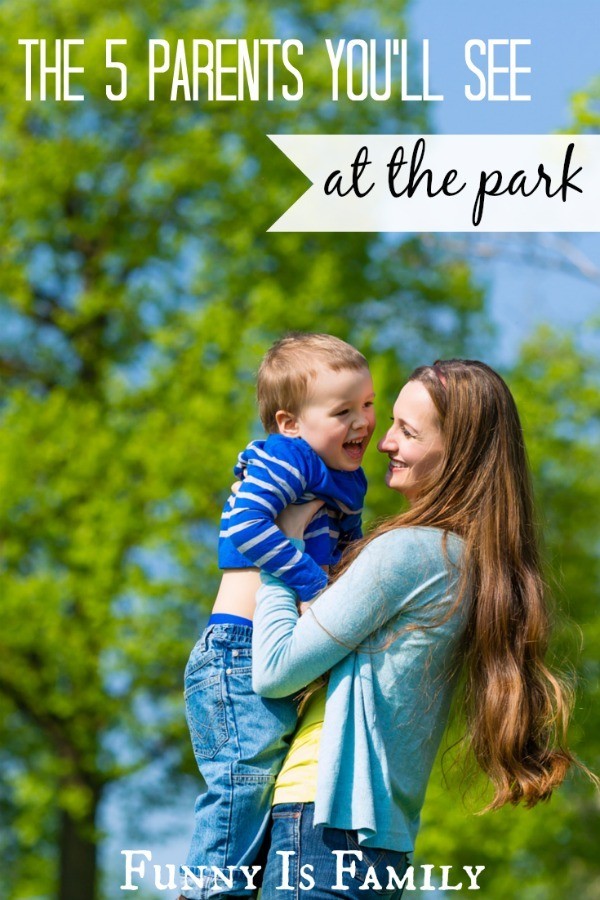 Last week I took my four-year-old to the park. After making the rounds and checking out everything the park had to offer, my girl secured a shovel, a bucket, and a section of the sandbox, and while she was busy filling, dumping, and refilling her bucket with sand, I sat and observed the other kids and adults.

I was only able to take it all in because my kid is older, because I only had one of them with me, and because my friends hadn’t shown up yet. As soon as my mom friends arrived, we four chatted while our children played, and my daughter could have been sacrificing virgins for all I knew.

The playground is a unique experience for everyone. Obviously the kids get something different from the playground than their caregivers do, but even in those two camps there are original perspectives regarding the time at the park. Here are some of the parents you’ll see at your neighborhood playground.

The New Mom
The new mom is easy to spot. Her eyes are both excited and terrified. Her baby is far too young to actually play at the park, but she is there anyway. She is either meeting a friend with older kids, or is trying out her mom wings and needed to get out of the house. The new mom can be found sitting on the bench, next to a sleeping baby in a carseat/stroller combo, because the baby fell asleep in the car. Moms with bigger kids glance at new moms, wistfully remembering when their kids didn’t smell like dirt and cheese, and when they could be placed in one spot and would stay there. These slightly jealous moms will only stare for a moment, because taking her eyes off of her own kids for too long will result in one kid finding the only patch of poison ivy in the park or the other one begging graham crackers from some strangers.

The Mom of Toddlers
Moms of new walkers and toddlers are the busiest bees at the park. They are also the queen bees of the park, because their kids aren’t old enough for preschool yet, so they are at the park ALL. THE. TIME. We practically lived at the park before my kids were in preschool. What else were we going to do on days there were no Toddler Time classes at the library?

Moms of toddlers meet at the park, but they never get to chat. Kids can sense when Mom wants to visit with a friend, and they shut that shit down by beelining for opposite ends of the park, confident that Mom will follow like a puppy. She always does.

When I was a mom of toddlers, I spent the entire time at the park either encouraging my kids to climb, “You can do it!” or dissuading them from climbing. “You have to go down the slide.” If I wasn’t managing a climbing situation, I was either forcing them to share, or reminding them to wait their turn. My kids don’t often look to me as a playmate, so I wasn’t the mom up to her elbows in sand pies, but I was always close enough to hear what was going down, and was always ready with a “No throwing sand, remember?”

For those few years, the park was exhausting.

Moms of Older Kids
Moms of older kids have the relaxed shoulders of parents who are in the homestretch. Her kids are old enough to use their words, pump their legs on the swing, and come a running if anyone is bleeding or saying bad words.

Moms of younger kids look at these parents who are laughing with their friends, playing on their phone, or reading a book, with a mixture of envy and disgust. These moms of older kids aren’t present, and their kids are probably playing too rough to be unattended with all of these babies and toddlers around. The moms of younger kids aren’t wrong, which is why little kids hang at the park on weekday mornings. Too many big kids flock to the park after school and on weekends, and that jumble of fast legs and wild arms can be rough for new walkers.

Moms of younger kids vow to be more engaged with their kids when they are older than these half-assed, chatty moms. They won’t be.

Dads and Grandparents
The adults that really got it going on are dads and grandparents. Dads and grandparents are blissfully unaware of the unspoken rules of the park. They don’t know that looking at your phone at the park means that you aren’t embracing your child’s delight, or that there is a fine line between how old is too old for the baby swing. Dads don’t worry about whether it’s too hot or too cold, and trust their kids to tell them if they want a jacket or not. Dads and grandparents will sometimes play with the kids, but are more likely to hang back, watching, but not too closely. However they act will be genuine, and not based on how they feel they are being perceived by other adults at the park.

Dads and grandparents don’t bring a healthy snack. They are going to McDonald’s afterwards, and will probably eat without washing their hands. If the ice cream man rolls up, they are all over that shit. If there is a scuffle over a shovel or a swing, they don’t get involved. If they want to sit down, they do.

Let me be clear: I have mad respect for dads and grandparents. I try to live my park life this way, but I’m only marginally successful. Since my chances of being a dad are super slim, I’m waiting patiently for the day that I get to be a grandparent. I did my time as mom, so I deserve my reward.