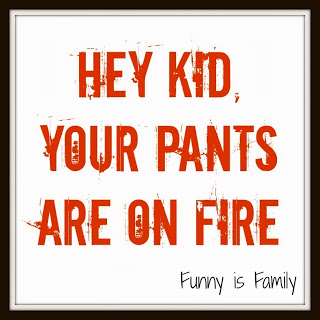 My husband and I flip our kids shit all the time. We tease them, use sarcasm, and do things like pretend we ate all the ice cream when we really didn’t. We did eat all the Oreos, but the kids didn’t even know we had those. Since we made these two people, we consider it our right to have fun at their expense, but we also see it as our duty. We want our kids to have a good sense of humor, and be able to pull off a lighthearted tease, as well as be able to take a joke. If we hear sirens outside and say “Uh, oh. Sounds like the police are coming to get you,” the kids assume we’re messing with them, and play along. My husband made a four-year-old burst into tears by saying the same thing to her. Her parents obviously aren’t assholes like we are.

My son’s ability to see through grown-up level BS would suggest that he would scoff at the lies of a peer, but that is not the case. He falls for every single whopper that he is served from his kindergarten classmates. He firmly believes one of his classmates turns from a boy to an alien at night. When he’s a nighttime alien, this classmate is tasked with pushing other aliens off the planet. Another classmate has told Graham that we have 200 ghost dogs and 200 ghost cats living in our house. A third classmate told Graham that he comes to our house at night after Graham has gone to bed to check on him and to chat with my husband and me. About Graham, and his behavior at school.

When I asked Graham why he believes these stories, he stated simply, “Because they’re my friends.” This made me want to pull him in my lap and protect him from the knowledge that friends will lie, and kindergartners are clearly the lyingest group of liars out there, but it also made me want to grab him by the shoulders and yell, “HE’S OBVIOUSLY NOT AN ALIEN! PULL YOUR HEAD OUT!”

I didn’t do either of these things. We still feed him the Santa, Tooth Fairy, and Easter Bunny stories, so why wouldn’t he believe in aliens, a house full of ghost pets, and classmates who watch him sleep and kick it with his parents? Why should we have all the fun crafting tall tales?

I don’t know how long my boy will believe his friends when they feed him a bullshit story, but I can see a crack in the armor already. Just this week a classmate wiped a booger on my kid’s shirt and blamed it on someone else. Graham didn’t believe the booger wiper’s story. He saw the deed with his own eyes, and wouldn’t be swayed. I think I’ll send Graham over to Snot Finger’s house to have a late night chat with the parents. I’m told that’s what friends do.

I’m not gonna lie. I’d love it if you clicked this banner!