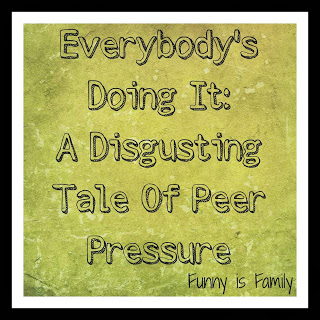 It was hot, and we weren’t ready to go inside, so we took refuge from the heat in the garage. I was the only girl, a fact that was not acknowledged because it was so common, but also a fact that slightly colored every interaction. My brother and my three cousins, all boys, all younger than I, were ganging up on me. Per usual.

“Just do it!” The youngest of the bunch jumped up and down excitedly, a summer day of outside play collecting dirt and sweat on his face like suburban warpaint. “No,” I protested. My brother rolled his eyes. “She won’t do it,” he told the others. “She never has.” “No way,” my oldest cousin said, calling bullshit. He is three years younger than I am, but has always been more responsible. “Everyone’s tried it.”
“Not me,” I shot back, feeling cornered. My middle cousin looked bored, his finger tracing the condensation on his soda can. “Come on. It doesn’t even taste like anything.” I clamped my hand over my mouth, but only for a second. “You guys are sick. I don’t care if everyone’s done it. I don’t believe you that it doesn’t taste like anything. I’m not doing it.” My brother clarified, “It doesn’t taste like nothing. It just tastes like dirt.” “And salt,” my middle cousin added.
“Screw you guys. I’m not eating my boogers.” I clamped my hand over my scowling mouth again, the heat of the garage and the thought of putting snot in my mouth on purpose turning my stomach and making my salivary glands prepare for the expulsion of my lunch from my stomach.
This wasn’t the first time I had experienced peer pressure. It wasn’t even the first time I had experienced this exact form of peer pressure. Like most of these types of situations, this was one that urged me to do something that made me uncomfortable, but that everyone else seemed to think was no big deal. I knew that my cousins and my brother no longer picked their noses and snacked on their findings, but it was clear that they would definitely do it on a dare. After all, it was just like eating salty dirt.
I held my ground, because disgusting, and I am proud to report that I have never eaten a booger. At least not intentionally and not since I was old enough to begin collecting memories. My husband dismisses this claim, saying there is no possible way I am a booger-eating virgin, and that I just don’t remember doing it. I have no memories of allowing nose nuggets to cross my lips, but I do remember feeling ridiculous for not doing it. Maybe it is no big deal. Maybe all kids do eat their boogers. Maybe it really does taste like nothing. I’ll never know.
Those booger hazing cousins are some of my favorites, and we have spent quite a bit of time together as adults. Every time I entered their parents’ garage (every time I’m there, because that’s where the beer fridge is located) I think of that day, feeling the pride of a girl with some backbone, and the urge to clamp my hand over my mouth again.
In my later years, I did plenty of peer pressuring, and I was swayed by my friends’ ridiculous suggestions myself, but I’ve never stuck my finger into my nose and then into my mouth. The snot of my sneezing kids is another story entirely, and I have swallowed some of my kids’ nose material, but not on purpose. Never on purpose.

3 thoughts on “Everybody’s Doing It”