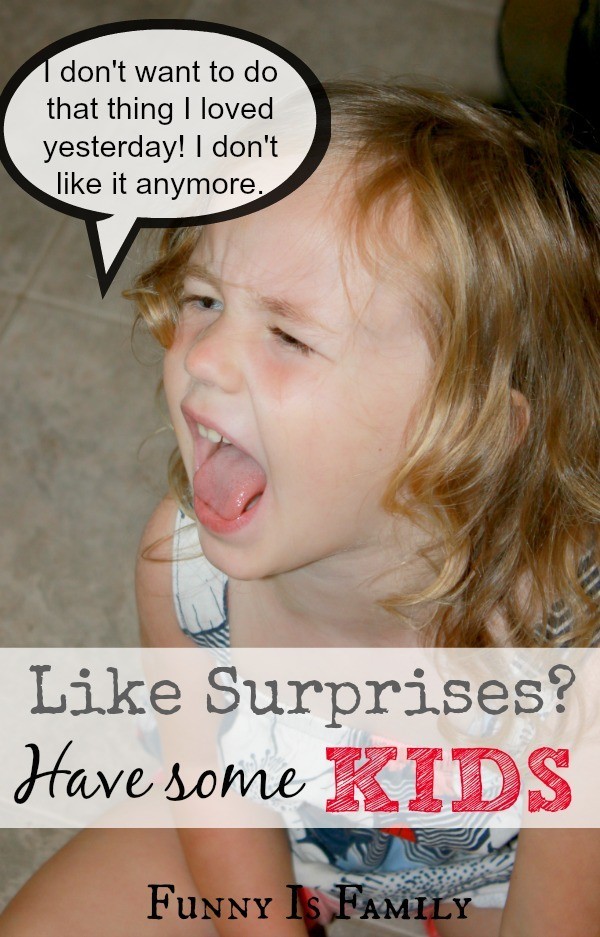 I remember when my oldest was born, and I couldn’t wait until I figured him out so we could coexist peacefully. I would understand his cries, get him on a schedule, and recognize his needs and manage them proactively. Six years later, and I’m still waiting.

Just when nap times were established, they changed. He loved being held like a football, until he didn’t. He liked peas, but only for two weeks. When asked about his preferences, I would shrug and give a wishy-washy answer. I felt a strong connection to my boy, but suspected he was messing with me by pretending to not be able to roll over until I walked out of the room.

His sister was no different, but this time I was prepared. I knew that even though she slept through the night at two months, it wouldn’t last. Of course because I knew it wouldn’t last, it did last. Finally after being a mother for over two years, I understood: I was in for a lifetime of trying to figure my kids out. They are mine, but I will never know a person completely, even when that person spent nine month inside my body. A parent who says they know everything about their child is either lying or in denial.

Sometimes, the way my kids surprise me are more public than others. Just last week, my three-year-old drank 20 ounces of water within the first 15 minutes of her brother’s t-ball game, and had to pee shortly after. These two things were not a surprise. That girl pounds beverages like she’s at a frat party, albeit a sober fraternity, because unless you count that one time she accidentally took a sip of my “grown-up” Vitamin Water, I always give her non-alcoholic beverages in her princess water bottle.

There was no bathroom at this elementary school baseball field, not even an porta potty, but I have a little two dollar Ikea potty in the back of my rig just for these situations. We headed towards the parking lot, which was eight miles away in kid steps, and it became clear that we weren’t making it to the car. We peeled off into the trees so she could squat, and since perfecting the squat takes years of practice, my girl drenched her leggings and her undies. She got a little on her dress and her shoes, too. This also wasn’t a surprise. Nor was the fact that I didn’t have any spare undies or pants in the car. I am nothing if not terribly unprepared. I did have two hoodies, a jacket, and a puffy vest for her, but none of those items would cover her hoo-ha or her bare bottom.

It was fine. We were well past the halfway point of the game, and she had a dress on. It wasn’t windy, so the dress wouldn’t blow up. She wasn’t a frequent skirt lifter, and she had just been sitting nicely on my lap, anyway. She wasn’t climbing the monkey bars or doing cartwheels or any other crotch baring activities.

Here’s where I get my surprise. Turns out my girl is a skirt lifter. She flashed everyone in attendance her bare undercarriage no less than three times in a half of an inning, while I was frantically doing all I could to keep her hemline by her knees. If you asked me before that day if she lifted her dress, I would say, “She has, but it’s not a problem.” WRONG.

My boy surprises me, too. He’s more unpredictable than his sister. His likes and dislikes change weekly, if not daily, and his only constant in the past year is his love for Legos and candy. He’s six, and I can already say with certainty that I don’t know everything he is thinking.

As someone who would never be able to order “the regular”, I appreciate varied likes and behaviors. I enjoy people who surprise me and keep me on my toes. I know that both of my kids will flip a lid if an adult attempts to pierce their juice box for them (they aren’t babies, and sticking the straw in is the fun part), but have no idea if they will want to eat the delicious ribs their dad is grilling right now. Yes, they gnawed every scrap of meat off of the bone last time he grilled up a rack, but that doesn’t mean they will this time. (I’ve never noticed how many euphemisms are involved in discussing meat product consumption.)

Asking my daughter to fetch me something or to feed the dog will result in an enthusiastic “Coming right up!” or a fall-down-on-the-floor whinefest. She’s toooo tired, her legs don’t work, she always has to do all of the things. One day she can’t put a book away without help, and another she cleans her entire room without any nagging. I never know what food she’ll like on any given day, the only constants being her undying affection for tomato soup and strawberries; and her wardrobe choices are always a surprise. I thought she would hate soccer, as she doesn’t like to run, but she loves it. Even the running.

My six-year-old turns on his lamp at night to read, even when he’s been told “lights out”. I know, right? What a little sneak with his illicit learning. He dressed like a cowboy for an entire week straight, then transitioned to  a more formal look, with three days of shirts and ties, only to abandon that for sweats and warm-ups.  He’s written that he hates me, but he jumps in my arms at school. He yells at his sister for talking to him, but he happily plays with her for hours.

My kids will forever surprise me. Sometimes it’s as messy as a pee squat gone wrong, and others it’s as refreshing as a vodka Vitamin Water. As long as those surprises don’t involve flashing an entire sports team, I am content in knowing my kids as they are: interesting and changing individuals.