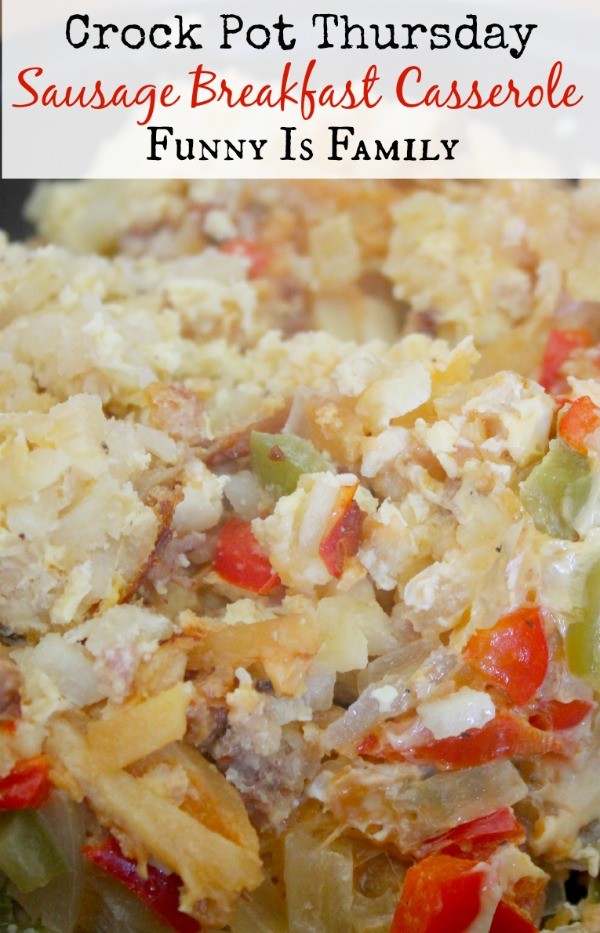 This Crock Pot Sausage Breakfast Casserole is great for feeding a crowd, or just a family of four for several days. I put this recipe together in the evening, plopped the ceramic insert in the fridge, and before my night owl husband came to bed at midnight, he turned it on. It was done at seven hours, and I was thrilled to wake up to a hearty breakfast, even though it freaked me out a little.

I was disoriented in the morning, and the smell of food cooking and the sight of the only other adult in the house snoring next to me was momentarily confusing. I quickly figured out what was going on, and gave a imaginary high five to Previous Night Me for making breakfast for Morning Me. 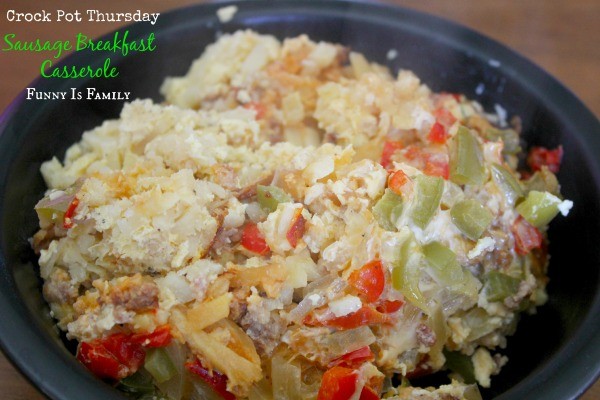 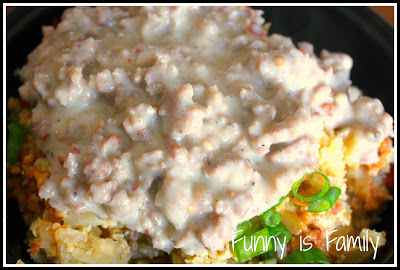 Sarah
Our family loved this. My husband came home at lunch and immediately wanted to know what I was making because it smelled so good. I have to agree with him, it really did smell great. I was afraid that there wouldn’t be enough meat in this meal for the man. I decided that sausage gravy sounded good and poured that over top. I’m glad I did. My daughter who is almost 2 loved this without the gravy and ate a whole bowl full. I made this exactly as the recipe stated and can’t really think of anything I would change. I did put green onions on the top, but didn’t feel like it was necessary and wouldn’t probably do it next time.

Kim
We did like this recipe and it was a nice departure from standard crock pot fare. The first night, my husband said, “I do like it, but I don’t think the sum is greater than the parts.” Meaning that we’d almost rather eat a fresh egg and sausage scramble… But we added more cheese and some sour cream (yum!) the second night and enjoyed it even more. I think next time I will consider adding more sausage (1/2 lb of spicy mixed with the 1 lb regular) and more cheese. I also thought adding some pats of butter on top of the hash brown layer would be tasty. And I’m definitely in favor of adding sour cream. Not sure it would work well to cook it in there, but it’s great as a topping.

Stephanie
Breakfast for dinner! From a crock pot! Double awesome!! This was yummy. Loved the Italian sausage and the gravy (definitely will use the gravy next time). I want to have some overnight guests visit so I can look all impressive and stuff and serve this for breakfast.

Linda
We all liked this also. We thought it would be more egg flavored, but was more like a potato-sausage casserole – which is great. We put sausage gravy on top like Sarah suggested, and it was very yummy. The first night I put the sour cream, avocado, salsa on top, but the gravy was far better.

Me
I made this as directed, and besides it only needing 7 hours on low, I wouldn’t make any changes. My husband would like more sausage (always) and he is going to be so pissed when he finds out Sarah put sausage gravy on hers. He gets jealous like that.