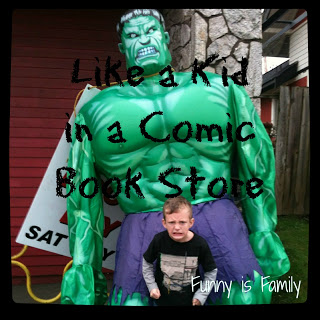 Last summer, The Doctor’s sister and her husband took my boy to the comic book store. My sister-in-law is a kindergarten teacher, so Graham loves going to the store with her because she usually buys him an awesome treat. Her husband is a comic book fan, and he couldn’t believe that at the ripe old age of five, Graham didn’t have any kid comics yet, and on this particular day he set out to correct our gross oversight.

There were some pictures taken of that trip, and they just resurfaced this past weekend. I knew my son loved the comic book store, but it turns out, I didn’t know why. Graham was fascinated by many of the items in the store, and he came home with an early-reader Superman comic, but based on the photographic evidence, he was drawn to a different type of product. 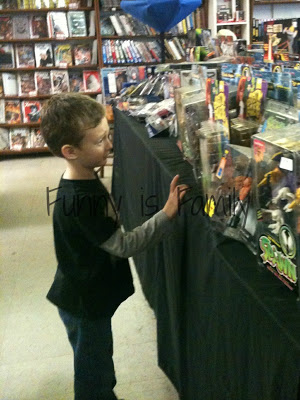 Like a kid in a candy store, right? Want a closer look at what he’s ogling? Maybe a Star Wars figure or an awesome superhero? 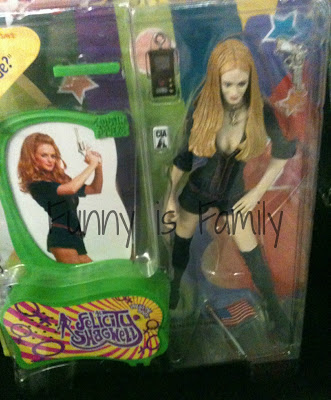 Nope. Felicity Shagwell from Austin Powers. In fairness, his dad is partial to Heather Graham, too. My brother-in-law and sister-in-law tried to steer him to more age appropriate items, but before settling on Superman, he spotted one more figure that he needed to inspect closely. 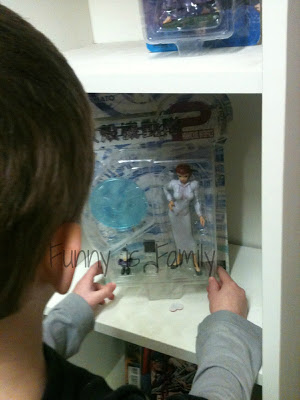 It’s safe to say to assume my boy will be wanting Uncle Matt and Auntie Stephanie to take him to look at comics next time we see them, too. Graham even thinks the comic book store is better than the mega-awesome teacher supply store that Auntie Steph has taken him to in the past. After all, there are no buxom toys at the teacher store.
If your early reader is interested in comic books, Matt has shared some great suggestions for new comic book enthusiasts. Click on the images to learn more about each series, and if you order them on Amazon, you can avoid having to talk your kids out of any boobie-type action figures. Check your library, too. Our children’s department has a nice graphic novel section. Yours may, too!

Do your kids like comic books? Do you have suggestions to add to this list? Tell me in the comments!