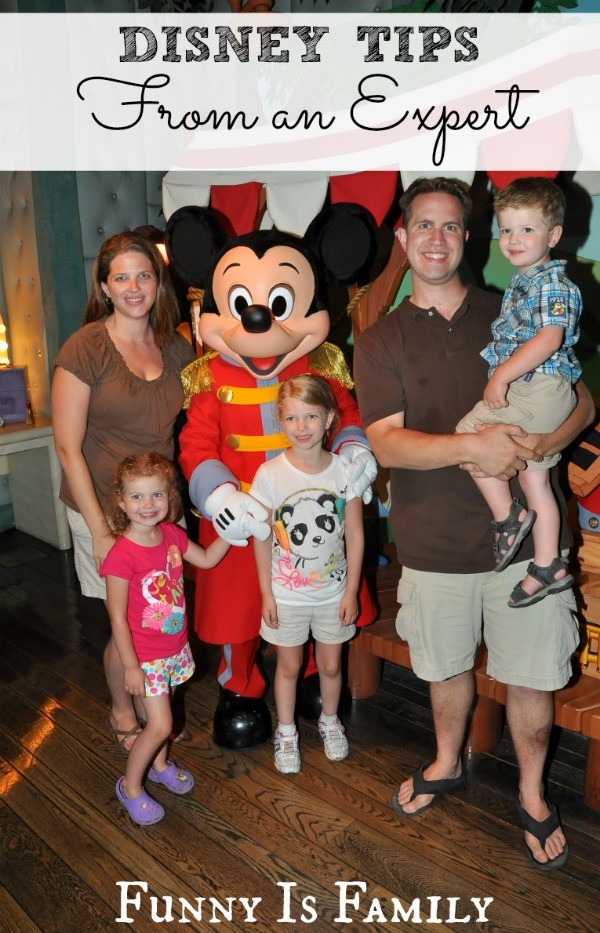 Spring break is just around the corner, and for some of you lucky suckers, that means visiting The Mouse. Here on the East Coast, everyone goes to Disney World for their Disney fix, and on the West Coast, more people head to Disneyland. I don’t know about the middle of the country; I’ve never lived there. In fact, I really don’t know much about Disney. I went to Disneyland for the first and only time when I was fifteen, and it was amazing, but I’ll bet we could have gotten more out of it with some advice from an expert. We haven’t taken the kids yet, since all of our travel budget is spent on trips to see our families, but I guess that’s what we get for moving our kids 3000 miles away from their grandparents.

My friend, Megan, is a Disney expert. She has visited multiple times, and she even spent a semester in college as part of the Disney World College Program, which I’m told isn’t just riding rides for college credit. The Walt Disney World College Program is basically a summer internship. You live in an apartment complex owned by Disney and work in the parks or resorts, where you learn all about Disney’s professional culture and really why they are the best at what they do.

Megan says, “If you really want to go, tell them you will do any job offered. Not everyone can be a skipper on the Jungle Cruise! When I did my interview, I told them I would do anything but ‘clean toilets and scrape gum’. Lucky for me they really needed restaurant cast members that summer.”

Megan’s parents love Disney, her husband loves Disney, and it should go without saying, her children love Disney. She has turned her love of all things Disney into a career as an authorized Disney travel planner. She allowed me to interview her, and share with you her Disney expertise.

Which do you prefer, Disneyland or Disney World? Why?

I’ve always been a Disney World girl – it’s where I’ve spent the most time, where I worked and have the most memories from, so I will always be partial to WDW. However, after my husband and I took our kids to Disneyland last summer I’ve fallen back in love with both Disneyland and California Adventure. They’ve done a lot to enhance the parks over the last several years and we had an awesome time.

How many times have you been to Disney?

I’ve seriously lost count. I think I’ve been to Disney World 14 times (soon to be 15!) and Disneyland at least 5 times. So, between the two, well over 20 times!

Disney Tips from an Expert

What are your tips for doing Disney with small children?

Bring a double stroller.
Even if your kids are old enough to walk on their own. We have a sit-and-stand type stroller and even my 7 year old still hops on at the end of the day. Plus, you can use it to Sherpa all of your crap around the parks!

Split meals!
Unless we’re eating at a buffet-style restaurant we always split meals (even the adults). Disney portions are generous and the food is awesome. If you split that sandwich at lunch you have room (and money) for that afternoon popcorn or hot dog. We’re a family of 5, so we typically get 3 meals and split them among us. And trust me, no one goes hungry.

Work the Fastpass and rider swap!
Not everyone in my family is tall enough to go on everything, and with 3 kids waiting in 2-hour lines is out of the question. Fastpasses are a reservation for you to ride on the most popular attractions. You put your ticket in and it gives you a 1-hour window for you to come back and ride with almost no wait. We always have a Fastpass for something. Also, if you have little ones who are too small to go on some rides, ask the cast member at the front of the attraction for a rider swap pass. It allows one parent to ride (with big brother or sister) then you switch and the other parent gets to ride (also with an additional person). It’s super awesome.

Where is your favorite place to stay?

I love the Beach Club Resort. You can walk or boat to Epcot and Disney’s Hollywood Studios and are across a lagoon from the Boardwalk. Plus it has the absolute best pool on Disney property. 4 words: Pirate Ship Water Slide!!

What is a “must see/do” while there?

Soarin at Epcot. Hands down the coolest ride I’ve ever been on. This is a popular one, though, so use those Fastpasses!

What can be skipped?

My daughter took some of her first steps into Minnie Mouse’s arms. Pass the tissues.

You love the hell out of Disney. Why?

It’s comfort food. You can really be a kid again when you’re there. I’ve visited Disney Parks at all stages of my life and every time I walk onto Main Street or step foot in Epcot I feel like I did when I was 8 years old. And come on, you never get tired of feeling that.

If you could spend the day at Disney with any celebrity (dead or alive) who would it be, and why?

I suppose I should say Walt Disney, but really I’d love to spend a day with John Lasseter (chief creative officer for Pixar and Walt Disney Animation Studios) . Aside from being a genius and one of the great innovators of our time, I get the sense that he’s also just a big fan and person who appreciates the parks as much as I do. I’d love to get his dining recommendations.

What are your dining recommendations?
Disney dining is pretty much my favorite thing um, ever. My top “quick service” restaurants are Columbia Harbour House (my former place of employment at Magic Kingdom!) Tangerine Cafe (Monaco, Epcot — trust me, I still have dreams of the last meal I ate there, in a good way). For sit-down service, the Sci-Fi Dine In at Disney’s Hollywood Studios is incredible! I am also quite partial to Chef Mickey’s & Crystal Palace for character buffets. Yum yum!!

Who is your favorite character?

I love Disney Villains. Love them. What does that say about me??

Can you share anything interesting from your days as a cast member without The Mouse coming after you?

The utilidors (the underground tunnels under the Magic Kingdom) are a trip! But you know how you never see a bit of garbage at a Disney Park? Well, it all has to go somewhere so down to the tunnel it goes. PeeEw – it’s stinky down there!

Thanks, Buddy, for letting me interview you. I hope someday we can do Disney together!

Megan Temple has had a passion for Disney Travel since her first trip to Walt Disney World in 1985. Since then, she has visited Walt Disney World and Disneyland Resorts over 25 times. After starting out consulting friends on their Disney Parks vacations, Megan joined Fairytale Journeys in late 2012.

Megan is a graduate of the College of Disney Knowledge and the Walt Disney World College Program. While on College Program she was named the “Model of Excellence” for her division. She and her husband are the proud parents of three Disney Parks-loving children.