I sometimes piss people off. 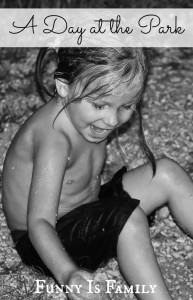 I don’t always follow social norms, a fact which delights some folks and irritates others. Sometimes I truly don’t know how to be as buttoned up as an occasion may call for, other times I act out just to see what will happen. Usually, I’m just being me, like that one time at the park three years ago.

We had been in our town for just over a month, and had found a park a few miles from our house. My only local friend, besides my husband who left me every day to go to work (rude), was my 16 month old son; so many days were spent at that park.

On this particular morning, there had been a few days of heavy rains, and while this day was sunny and dry, the terrible drainage at the park left huge puddles around the play structure. I was feeling particularly free that day, and I allowed my toddler to jump and splash in the puddles that came up to his knees. He was having the time of his life, and I was digging his enthusiasm, thankful for the warm weather and the abundant rains that allowed this special treat.

I noticed a little girl head towards my son, with her mother on her heels. She snatched her girl up, saying “No. You can’t get wet,” while she gave me some serious stink eye. I was surprised, but not as surprised as when I looked around, and found the million mom stare.

Every grown up in the park (except the one dad over by the sandbox) was looking at us, annoyed that I had broken some unspoken rule and allowed my kid to get wet and muddy. They would have to explain to their own kids why that little boy got to get wet, and they didn’t.

I was embarrassed. For about one second.

Then I remembered that these are the same women whose kids run to the ice cream truck as soon as the joyfully terrifying music comes wafting from the parking lot, while I explain to my child that we don’t get ice cream every time we come to the park. (Full disclosure: We’ve never gotten ice cream from the ice cream man at that park.)

Look at me, all saying no to my kid and not hating you for saying yes to yours!

In the multiple times we’ve been to that park, with its piss poor drainage and its frequent puddles, we’ve only puddle splashed two times. Usually the weather doesn’t permit being wet outside, but sometimes I just don’t feel like dealing with the mess. Now that I have two kids, the clean up is more involved, and we don’t often have spare clothes in the car.

I’ve never once been pissed at another family for taking advantage of the lake of bark-filled water, though. Have fun! Get wet! If time and temperament allow, it’s a blast!

I know I sound very easy-going and breezy. This is not always the case.

Some things annoy me. Not enough for me to say anything – though I may make fun of you in my head. Sometimes I feel bad about it, but sometimes not. I love making fun of things, and there is only so much of my own dumbassery to mock. Here are some of the asshats I’m talking about.

Five Parents Who Piss Me Off 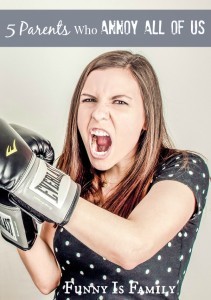 Parents who invite half the class to a birthday party and hand out the invitations at school.

First of all, you can invite zero or thirty kids to your birthday party for all I care. I usually go for zero, but wish we could do thirty. My beef is with dispensing the invitations at school where the uninvited kids are going to see, and obviously feel left out. Even if they aren’t friends with your kid, or if they don’t want to come to your crappy Sponge Bob birthday party, you should avoid hurt feelings by springing for a stamp, you cheap sonofabitch.

Parents who take their sweet ass time in the drop off lane.

See all of those cars behind you? Waiting to drop off their kid and get to work, or get home to check morning blog stats? Every second you idle in line longer than necessary is one second the seven parents in line behind you spend hating you. Know who else you are pissing off? Those poor teachers who are standing in the cold waiting to see your child into school safely. Do us all a solid, and make sure your kid has everything ready, and is prepared to hop out of the car when you hit the brakes. Maybe it takes a little longer during the first week of school, but it’s March. It should be a smooth transition by now. For the love.

Parents who yell at referees and coaches during soccer and t-ball games.

Even if your child is as gifted as you think (he’s not) you look like a fool, and you are embarrassing your family. Sit down and zip it. If you have a legitimate concern, address it at the appropriate time, in an appropriate tone and volume level.

Parents who send Doritos in their kid’s classroom snack every day.

This one only annoys me because then my kid wants Doritos, and I don’t want to share my Doritos.

Parents who let their three and five-year-olds watch PG movies like Harry Potter and Star Wars.

Oh wait. That’s me. I’ve also told my kids how babies come out and we’ve talked about death. Sorry that they may have explained to your kid what cemeteries are all about.

See? I sometimes piss people off.