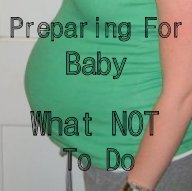 I love those hilarious lists that compare first pregnancies with subsequent pregnancies. Everyone is so excited for that first baby; the nursery is ready by week 25, names are secured by the end of the first trimester, and daycare options are scouted preconception. Any baby born afterwards is thrown in the older sibling’s hand me down gear, and diapers are purchased on the way home from the hospital.

These lists are funny, but they make me feel a little bit guilty. My firstborn’s experience wasn’t nearly as golden as it was obviously supposed to be.

I am a top-notch procrastinator. You give me nine months to do something, and I’m going to put it off until eight and a half months. I read all about my pregnancy, relishing in the weekly email updates telling me what kind of fruit my baby resembled, and cheating by reading ahead in my daily update book. Daily updates? Gimme a break. The only thing more ridiculous than daily updates on how my peanut was turning into a walnut, were the suggestions for how to keep dad involved in the pregnancy. One time I was able to talk my husband into giving me a two minute shoulder massage, but besides that, he didn’t do one damn thing those books suggested. No foot rubs, no pedicures, and not one late night run to satisfy any kind of craving.

He did take on some additional responsibilities around the house during the first trimester, when preparing any kind of food that wasn’t Cinnamon Toast Crunch or ramen noodles made me puke, but that wasn’t because he read it in any book. The man was hungry. The only other task he took on was picking up the dog’s poop, and I’ll admit: His taking my share of that crap job was worth an entire pregnancy’s worth of back rubs.

We did do some preparing for our baby. A friend who already had kids gave me a list of things I would need and things to avoid. I pretty much registered for all of the things she told me to, considered myself done, and took a nap. Christmas came, and we received many of the things from our registry. We didn’t have a car seat yet, and we hadn’t decided on what crib we wanted. No biggie, we had until the end of May to work that out.

We got the guest room and the junk room consolidated into the guest/junk room, so the extra bedroom could be turned into the nursery. We got some hand-me-downs, and we hung up some of those baby clothes, left the rest in the garbage bags they came in, and shoved the bags in the back of the closet.

I’m not sure what happened, but May came, and we still had no crib or car seat. We did, however, have a baby. Since I went into labor three weeks early, we only made it to two childbirth classes, and luckily one of them was on pain management.  My husband had to borrow a car seat from a coworker to bring our son home from the hospital. Once we were home, our sweet boy slept in a Pack n Play for four months because we asked the family member who was going to buy us a crib to buy us an air conditioner instead. It was really hot that spring.

Gear wasn’t the only thing we neglected to secure before our boy arrived. We hadn’t decided on his name until after he was born. If I couldn’t pull the trigger on a crib design, how was I supposed to choose a name for someone I’d never met? A name he’d have for his whole life? I love my son’s name, and I love the family member he was named after, but I wasn’t sure we made the right choice for several weeks.

I didn’t start shopping daycare locations until I was halfway through my maternity leave. Every time I would start the process, I would end up rocking my boy and crying. I didn’t want to go back to work, and I sure as shit didn’t want to leave my son, so I ignored the situation, thinking it would go away. It did not, and I eventually put my big girl panties on and found a great daycare. Just kidding about the big girl panties. I had just had a baby. My panties were gigantic.

Here’s the deal: If this was the best we could do for my firstborn, what was going to happen with the second? How could we possibly neglect her more than her brother? Well, we didn’t. It’s not so much that we did things better, we just had less to do. We already had all the gear, so we didn’t need to borrow anything to get her home, and since I wasn’t working, I had time to nest. She had a freshly painted nursery, with stuff on the walls, and a crib. No Pack n Play for that girl!

In fact, not only was our second child not neglected any more than her brother, my poor little two year-old was the one that got the short end again when his sister was born. She was in the hospital for most of that first week, and when I did get home with our girl, she was on my tit 24/7. To say my son spent a lot of time in front of the TV would be an understatement. He will never complain about his time with Mickey and the gang, but it’s not winning me any parenting awards.

As an older child myself, I understand how it’s going to be for my firstborn. While they both live in our house, he will be responsible for helping his little sister with things she can’t manage on her own. Right now, that means reaching the cereal and opening the peanut butter, but down the road it will mean giving her rides, and keeping her away from creepy upperclassmen. He did get two years of only child adoration, but being the firstborn has more responsibilities than perks. Maybe I should have painted his nursery and picked out a crib to show my appreciation for years of helping me with his little sister. He at least deserved his own car seat.

5 thoughts on “Preparing For Baby: What NOT To Do”