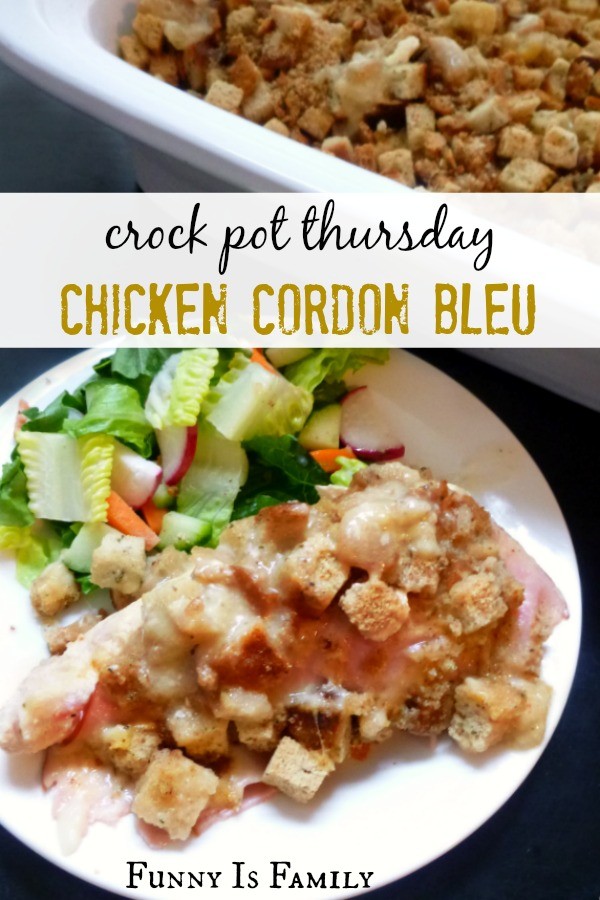 This series is called Crock Pot Thursday, but last week, I did not Crock Pot on Thursday. Not because we went out to dinner on Valentine’s Day, obviously. I have small children, remember? In fact, I think the only Crock Pot Thursday members that went out on Valentine’s Day were my husband’s parents. It’s no coincidence that they are the only ones without small children at home. I swear, I can’t wait until I’m a grandparent. Those guys are seriously living the dream.

I began gathering my ingredients on Thursday, and realized we were out of Swiss cheese. We bought it, but I didn’t tell my family to save five or six slices for the recipe, so they ate it. All of it. No worries, I had the chicken and the Crock Pot out, so I made Crock Pot Shredded Chicken instead.

The next day, I made a run to the store, and procured some Swiss. On Sunday, I dug around in the freezer for some chicken to give this Chicken Cordon Bleu another go, and guess what? I had used the last of the chicken on the shredded chicken recipe. HOW COULD THIS BE? A freezer without chicken? We always have chicken. I didn’t even check, because we always have chicken.

At this point, if I didn’t have to write about it, I would have thrown in the towel on the troublemaker of a recipe.

At this point, I would have had to make three trips to the store.

At this point, I was beginning to think I needed to be more organized in my meal planning.

On Monday, the kids and I ran to the store to get some mother trucking chicken, and when I went to pay, my wallet wasn’t in my bag. You guys, if I had to leave, go home and get my wallet, come back to the store for the chicken, I was going to kick my own ass. What else could I do? I had no one to blame for any of this hassle but myself. WHY did I need to switch handbags that morning? I thought I moved my wallet, too, but I obviously didn’t. While I was digging into the depths of my bag willing that wallet to appear, I found something just as good. A folded up ten spot. I did a little dance, paid the cashier, tore my kids away from the celebrity magazines and candy rack, and headed to the car.

Where I found my wallet on the floor. My life needs a serious organizational overhaul. I rolled home, and made some slow cooker Chicken Cordon Bleu. FINALLY. It was good. My husband says it didn’t make him think of traditional Chicken Cordon Bleu, and he kept saying, “Stuffing, huh?” and “This is called Crock Pot Chicken Cordon Bleu?”, but he enjoyed it, despite its name. The kids loved it. There was a “This is a really good dinner, Mommy,” from one kid, and a full-mouth, nodding agreement from the other.

And those words made it almost okay to have made three trips to the store for one recipe.