We flew back to New England last week, after spending two weeks Christmasing with both sides of our family, and landed ten minutes before midnight on New Year’s Eve. Even though we were at baggage claim when the clock struck midnight, this particular NYE wasn’t any less sucky than almost every other NYE in my 35 years. In fact, it was probably better than many, as I was actually AWAKE. I’m so wild, you guys. I was really hoping we would get some complimentary champagne on the plane, but I settled for a Diet Coke.

After getting our bags, taking the shuttle to long term parking, digging our car out of the snow, and getting on the road, it was 1 AM. We were hungry, and had a 45 minute drive to our house. Our house that had no food. We saw some golden arches, and trained our rig in that direction. As you can imagine, we weren’t the only carload looking for some vitamin G(rease) at 1 AM on New Year’s. We pulled in the drive-thru line, warily eyeing the seven cars ahead of us. Our options were limited. No one else was open, so we waited. And waited. The line behind us grew, until there were 15 cars in line. The line was moving, but barely. After about 20 minutes, we got to the menu board and microphone. We waited some more. Finally, the car that had been in front of us came flying through the parking lot again. “They’re closed!” they yelled, laughing maniacally. WTF? Every car ahead of us had gotten to the front of the line, waited, and finally given up, driving away. That’s how the line was moving. That’s why it was so slow. It was pretty funny, but also super messed up. The golden M was on, the kitchen lights were on, and the sign said open 24 hours. Thank goodness for the car of drunk girls that did the rest of us a solid by looping around and telling us. Pulling away, The Doctor was swearing, as best you can with the kids in the car.  I was chuckling, but also starving, and my five year old muttered, “That’s dumb.” We don’t like the kids to use that word, but in this case, he was right.

The very next day, on the way to pick our dog, Edgar, up from the dog sitter, we finally got some McDonald’s. I should have boycotted, but we still didn’t have any food, and I wanted one of those $1 coffees that always ends up costing me way more because we grab “just a little something” while we’re there. Screw you, McDonald’s with your clever marketing and pricing. You keep pissing me off.

Graham and his three year old sister were tired. They were still on West Coast time, and we hadn’t gotten home the night before until 2 AM. They were dragging ass like most of the world, only our little family was just tired, not hungover. They were pretty quiet in the car, nicely sharing an order of fries and nuggets when I heard Graham say that word again.”Lily? Do you know what ‘dumb’ means?” he asked. “Yes,” she replied. “It means ‘stupid’.” “Then why did you call me ‘dumb’ this morning?” he demanded, angrily. “I’m not dumb, Lily.” Lily carefully selected a fry and said, “I just wanted to.” Cool. Dismissive. This just pissed Graham off more. “But I’m not dumb! I’m not!”

At this point I felt the need to jump in. Not to explain the different meanings of the word, but to stop a fight. “She knows your not dumb, bud. I think maybe she was trying to hurt your feelings.” This surprised him. “Were you, Lily? Were you trying to hurt my feelings?” “Yes,” she replied, not looking up from her lunch. “Oooh…that’s MEAN. That’s really mean, Lily.”  Graham looked at Lily for a long moment before asking, “Were you just feeling frisky?” Lily looked up. Nodded. “Yeah. I was feeling frisky like The Poky Little Puppy.” Graham nodded, understanding. He grabbed a nugget while she continued to munch fries, looking out the window. Graham’s feelings weren’t hurt. That boy knows a thing or two about being naughty and feeling frisky. 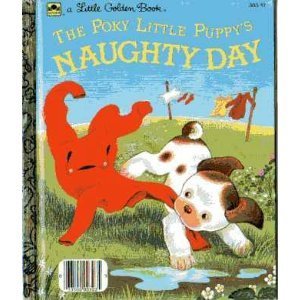 10 thoughts on “McDonald’s Is Dumb”