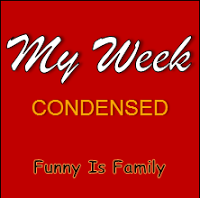 Last week was awesome in a sucky sort of way. My three year old was sick most of the week, and we hung pretty close to home. It was sad seeing her uncomfortable, but awesome in that I didn’t wear a bra for the majority of the week. It’s a good thing society dictates certain grooming and wardrobe behaviors, because left to my own devices, I could get pretty comfortable. And pretty disgusting. I did take some care in my appearance over the weekend, as I co-hosted a baby shower on Saturday, and took Lily to a birthday party on Sunday. A friend at the birthday party told me my boobs looked longer from my bra-less week, and I’m hoping she was just screwing with me.

I did something dumb, you guys. I watched live TV with my kids. I knew my kids were susceptible to children’t commercials, but as it turns out, they have some thoughts on products for grown-ups, too. It sounds like my kids aren’t the only ones who fall prey to advertisers. A friend commented on Facebook that commercials have convinced her five year old daughter that they need a Roomba, and has her asking “Mommy? What’s Viagra?”

My husband and I have similar parenting philosophies, but we go about it in very different manners. Both roles are important, but it’s obvious that he’s the fun parent. It’s probably like this at your house, too.

Last week’s Crock Pot Thursday recipe was a bust for most of the Crock Pot Thursday crew. Ours turned out okay, but we won’t be making it again. My pregnant sister-in-law was sick all day from the smell, and I feel bad that I laughed when she told me she threw up at least 20 times that day. I’ve been that pregnant lady, and it’s not funny. Not really.

I called a stranger a name, to his face, which was totally out of character, and had an interesting outcome.

I was excited to be featured at Mamapedia last week, talking about the made-up games my kids play.

I read some funny shit last week, including:
Rules for Visiting a New Mom at Scary Mommy
Henry Huggins, 2013 remix at subtracting additives
The Kids You’ll See at Your Kids’ School Concert at Let Me Start By Saying
and this beautiful piece by Shelly at La Tejana.
Blog commenting is an art, and Jen at People I Want to Punch in the Throat shares her favorite comments from the previous week in her weekly wrap up. I’ve had a comment highlighted two weeks in a row now, and I wear that distinction with an inappropriate amount of pride.

There are more than 150 funny mom bloggers stumping for votes for this year’s Circle of Moms Top 25, and I’m one of them! You can vote every day until February 13th, and you can vote for as many funny ladies as you want. There are some hilarious broads on that list, and it’s fun being on the same list as blogs I’ve been reading for years (even if they’re near the top, and I’m near the bottom). Click here or on the pink circle below to head over and vote, and click on the orange button next to my listing if you like my words.