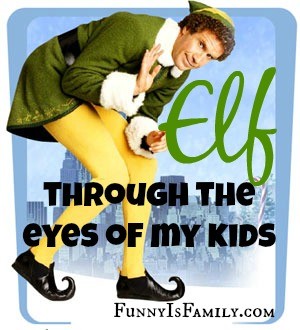 It’s time! Time for Christmas trees, holiday music, and wish lists. Time for spiked hot chocolate, cheap televisions, and expensive holiday travel. Most importantly, though, it’s time for Elf! I love the Will Ferrell movie featuring Buddy the Elf, and was so excited to share the magic with my six-year-old son, Graham and my four-year-old daughter, Lily. Here’s how it went.

Lily: Tell me when the funny part is gonna come.

Lily: That was funny.

Lily: Where is that baby going? The baby’s gone. Tears. Again.

Graham: That baby is in that bag!

Lily: When is the scary part gonna come? Is there a scary part?

Graham: Buddy fell on that elf.
Lily: The elf did this. Pats herself on the back. That was nice. I hope Buddy’s okay.
Me: He’s fine. He just fainted.
Graham: What’s “fainted?”

Graham: New York City?! We’ve been there! Why didn’t you tell me it was a magical place?

Lily: This show is too grown-upy. Can we watch My Little Pony?

Lily: He just wanted a hug.

Graham: What’s he eating?
Me: Old gum that naughty people stuck on that rail instead of throwing away.
Graham: Yuck.
Lily: Yuck.

Graham: He’s pushing all the buttons on that elevator! You aren’t supposed to do that.

Graham: What did he put in his mouth?
Me: Perfume.
Graham: What’s perfume? 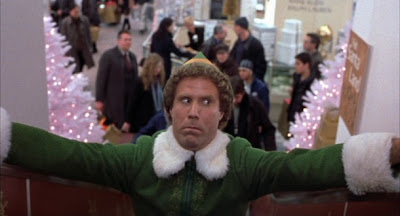 Graham and Lily: Laughing super hard at the escalator scene.
Lily: He’s doing that funny.
Graham: Imitates Buddy by attempting to do the splits.

Graham: Ha! He said, “Hey did you see these toilets? They’re ginormous!”

Graham: Whoa! He made that whole thing out of Legos?

Graham: That girl’s in the shower. Smiling.

Graham: Laughing. He ran into the wall.

Graham: That’s not the real Santa. See! Buddy knows, too.

Lily: What’s happening?
Me: The fake Santa and Buddy are fighting.
Lily: That’s not nice.

Graham: Laughing. A lot. Look at the present Buddy’s dad got! That’s funny. Why did Buddy’s dad get a girl boob thing for a present?

Graham: Is that jail? Why is he in jail? Why is that guy playing cards by himself? Why isn’t the fake Santa in jail, too?

Graham: Can we watch something else?
Lily: Yeah! My Little Pony!
Me: No. 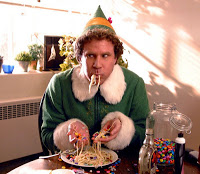 Graham: Why did he drink all of that? What is that?
Me: Soda.
Graham: Whoa.

Graham: I HAVE to try syrup on my spaghetti.

Graham and Lily: Laughing. Hard.
Graham: That was a really long burp. 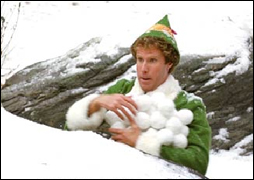 Graham: Why is that boy ignoring Buddy?

Lily: Oh no! What’s happening?
Graham: Those kids are throwing snowballs at Buddy and that boy.
Graham: Whoa. He throws snowballs really fast.

Graham: They shouldn’t be running in a store.
Lily: Uh oh. They’re jumping on the beds!

Lily: He pulled that Christmas tree down. Oops.

Graham: How does Buddy know all of those people’s names? What does “You just made my day” mean?

Lily: Why are they laughing?
Graham: They’re drunk. If grown-ups drink too much beer or wine, they get really funny.
Me: No they don’t. They get really annoying and think dumb stuff is funny.
Lily: I think it’s because they’re tickling each other.

Graham: His dad is really mad.
Lily: Why is he mad? Oh. Buddy is sad.

Graham: A skateboard? Awesome! Do you think I’m Santa’s book?

Lily: They have a baby!

Graham: Mommy? NOW can we watch something else?
Lily: My Little Pony!