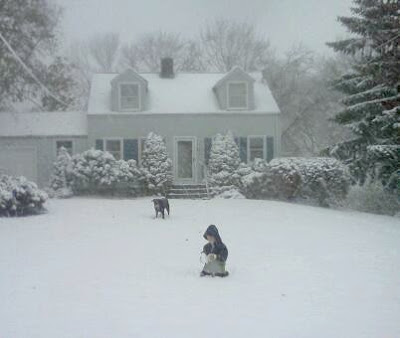 There is nothing like the first snow of the season. I’ve logged thirty-five winters, and I still get wrapped up in the magic of those first flakes. The way they float, slowly from the sky; clinging to leaves, branches, and eyelashes. The hush that comes over the world when the air is full of snow. I don’t imagine there will ever come a time that I am nothing but thrilled by winter’s (or fall’s) first snow.

Everyone in our house loves a snowy day. The Doctor likes shoveling snow, G immediately sinks to his knees and slaps together an arsenal of snowballs, and L grabs a handful and chows down. Edgar loves the snow, too, and will play in it as long as we allow. As for me, I love the way it looks and love the way it smells, but since I don’t like to be cold, I’m ready to go in after a few minutes. I love snow, and I love it most from inside a warm house with my hands cupping a mug of tea. 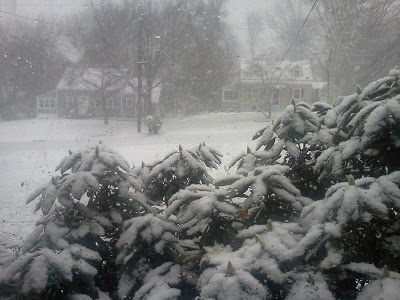 We enjoyed our first snow day yesterday. If I was still working, a snow day would be a problem. Arranging back-up child care, missing a day of work, or fighting with The Doctor over whose turn it is to stay home with the kids would all be issues to manage. Instead, I woke up at 5:45 am when Lily climbed in bed with us, looked at my phone and saw the school cancellation notification. Our morning immediately became more relaxed. We lounged for a while, the kids helped their dad shovel the driveway and walkway, and I rewarded the hard workers with a big breakfast.
Snow doesn’t come without challenges. I drove about two miles last night and slid pretty much the entire way. Because it was 10 pm and the middle of a Nor’easter, I was the only one on the road, which was good because I was all over that road. Also, too much snow can result in too many snow days, requiring the kids (and their educators) to have make-up days all through June. Our area has experienced this issue in recent years, and no one wants to be in school at the end of June.
As a  kid, snow days were awesome. As a working adult (with a 25 mile commute in a town with minimal snow removal capabilities) snow days were a pain in the ass. As a stay at home mom, snow days are awesome again. Despite my changing feelings about how snow affects my schedule, I’ve always adored the excitement, beauty, and peacefulness of the first snow of the season.

2 thoughts on “There’s Something About The First”