Since it’s supposed to be in the sixties here today, it’s hard to believe we saw the season’s first snow just a few days ago. The warm weather helped melt our almost foot of snow, and it disappeared nearly as quickly as it arrived. I love the magic of the first snow of the season, and I’m confident I always will. I also like to be warm, so I’m glad it’s already gone!

Our town sustained some storm damage from Sandy, so Halloween was postponed due to safety concerns. The make-up Halloween date was this past Wednesday, when much of the town was being blanketed under a foot of snow that was blown around by our Nor’easter. Not ready to give up on Halloween completely, our community hosted a Trunk-or-Treat event in the high school parking lot on Saturday night. Anyone who wanted to participate parked in the parking lot, brought candy and dressed up kids, and trick-or-treated out of the backs of vehicles. We weren’t planning on going, as we did some rogue trick-or-treating on Halloween, but we were invited to attend with some friends, and I’m glad we did. It was a fun night, and we were able to replenish our Halloween candy stash. Now that I think about it, that’s probably not a good thing.

I shared an original recipe for the first time for Crock Pot Thursday. My shredded chicken recipe is super easy, and can be used in a ton of recipes. I’m not usually a fan of chicken breasts, but prepared this way they are moist, flavorful, and delicious.

We took Lily to her first movie. We saw Wreck-It Ralph, and all four of us really liked it. She ended up on my lap during a scene that was too scary for her, and she cried a bit during a sad part. I cried a bit, too. Like me, both of my kids watch shows with active emotional reactions. Here is how Graham used to watch any scene that was too scary, sad, exciting, or funny: 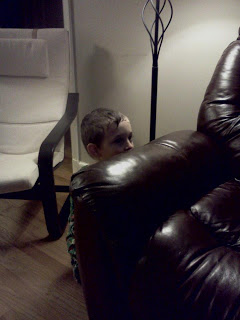 My parenting strategy is to be just above average, as I am nowhere near perfect. I admit my top ten justifications that help me feel good about my mediocre goals. Feel free to adopt some (or all) of these excuses, and enjoy less laundry, more candy, and mostly guilt-free parenting.

Graham brought home some pictures he had colored of Barack Obama and Mitt Romney that I thought were funny, prompting me to do what I said I wouldn’t do. Write about politics. Since this is not a political blog and I’m not ready for mean comments, I didn’t share my political leanings, but instead shared some of my favorite political internet memes.

Graham got to come with us to cast our votes on Election Day, and he wanted to know why you can only vote for one person in each race. Trying to explain politics to a five year old is tricky, but we did our best to describe a few of the differences between the two main parties. His take-away? “When I grow up, I’m going to marry a boy and have three thousand guns.” I guess he’s an Independent. Or a Libertarian.