When you become a parent, you know disgusting things are going to happen. Poop and snot are obviously going to be an issue. Pee and puke come with the territory. There are things that no one warns you about, but end up being fairly common as well. Like kids sneezing in your mouth. Before kids, I never once heard anyone complain about this, but ask any parent and they’ll nod knowingly.

Last week something happened that completely blindsided me. A few things had to come together to culminate in this one disgusting event, and I’m mostly to blame. 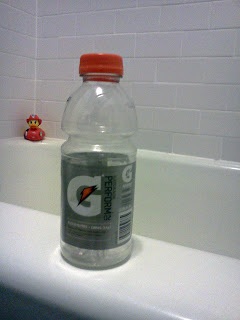 The kids have had gunky coughs with on and off sniffles for weeks. Like a whiny kid hanging on your leg, these lingering coughs are annoying and unreasonably persistent. In an attempt to ease the congestion, the kids were taking a long, hot, steamy bath. My son was thirsty, so I gave him one of his dad’s water bottles, which are actually spent Gatorade bottles refilled with water. I told my boy he could keep the water bottle by the tub, but the bottle needed to stay out of the bath.

Since the bottle was perched right on the edge of a tub that contained two wiggly children, it took about three minutes before that repurposed Gatorade bottle was floating in the bathwater. At that point, it became a bath toy, and was filled, dumped, and refilled for the remainder of the bath session.

Now my kids are about 50/50 on cleaning up their own bath toys, and on this day I was tasked with cleanup. My boy had filled the Gatorade bottle with bathwater and capped it tightly, so I carried it to the kitchen to be emptied and put in the recycling. Listen carefully: Beverage containers filled with bathwater should not be taken to a second location. Much like a kidnapping situation, nothing good can come from going to a second location. That was my biggest mistake. I am easily distracted, and I forgot about that bottle of bathwater nestled snugly with the rest of the paraphernalia crowded around the kitchen sink.

Fast forward to the next evening, kids in bed, me lounging on the couch with my favorite blanket, watching some sort of crime drama. I was thirsty and my husband was up, so I asked him to get me some water. He brought me…you know what it’s going to be, right?…a Gatorade bottle of water.

My loving and understanding husband laughed silently, shoulders shaking, while I gagged and explained how filthy bathwater made it’s way out of the tub, into a capped plastic bottle, into the kitchen, and into my mother effing mouth.

I still get gaggy when I think about it.

Disgusting things happen when you have kids.

30 thoughts on “Don’t Drink The Water”