We grown-ups are forever talking about how easy kids have it. How great it would be to have no responsibility and to have someone else feed, clothe, and house us. There is one group of adults not making these assertions. Prisoners. Because they have all of those perks, and they don’t seem to think it’s so spectacular. Being a kid isn’t as wonderful as we like to remember, and I doubt many of us would like to trade places with our children. Here are ten reasons I’m glad I’m not a kid anymore, because being a kid sucks. 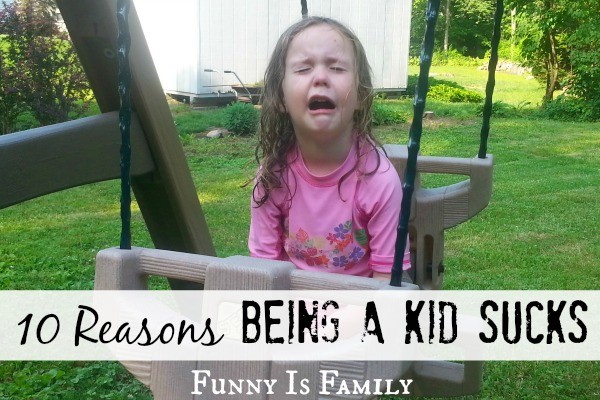 10 Reasons Being a Kid Sucks

1. Someone else tells you what to eat.
Oh, you hate broccoli? Too bad. You want cereal for dinner? Too bad. As an adult, you can eat cereal for every meal, and no one can say a word. Cake for breakfast? Have at it! My husband hasn’t eaten a mushroom in the 14 years that I’ve known him. If he was my kid instead of my spouse, you can bet your ass I’d at least make him try one.

2. You don’t get to choose your wardrobe.
Eventually most kids get some say in their wardrobe, and the cooler the mom, the sooner that day arrives. But, there are still the years when kids wear whatever outfit their parents decide. These get ups get more ridiculous based on the importance of the holiday, and while yes, they are adorable, I wouldn’t want to have to wear any of them. Especially those garter belt looking headbands that so many little girls are subjected to. Even when kids are able to choose their wardrobes, they run the risk of attending a school with a uniform, and then we’re back to adults deciding the attire.

3. You are subject to city-wide curfews.
Don’t even get me started on curfews. Adults commit much of the after-hours crime, but kids are the ones who are bound by municipal curfews. Just another way being a kid is like being a felon.

4. You don’t get the good snacks.
We think it sucks that we have to eat the good snacks while hiding in the pantry or after the kids go to bed, but it would suck way more to not get those snacks at all. Amiright?

5. Someone else decides when you’re tired.
I would be so annoyed if I had to go lie in my bed with the lights off even if I wasn’t tired, so I get why my kids bitch about naptime and bedtime. As a grown-up, I can stay up way too late watching bad TV, and no one can tell me to go to bed. Of course I’m tired the next day, but the freedom to make that bad choice is mine.

6. Someone else controls the TV.
There are about fifty bazillion awesome cartoons out there, and kids get 30 minutes to an hour of screen time a day? It’s like adults don’t even care that the DVR is filling up with My Little Pony episodes way faster than they could ever be watched. Some days, my kids don’t get to watch any television at all. The horror!

7. The bad words aren’t allowed.
In my opinion, the bad words are the good words, and I would think it was such bullshit if some people in my house could use those awesome words and I couldn’t. I love to swear, and I don’t even let my kids say butt or fart. It’s not that they don’t know how to use the words properly. They’ve displayed proper usage of several off-limits words. Since I would never accidentally let a swear fly in front my children, they must have learned it from someone else, like their dad. Or at school. Anyone but me, really.

8. Someone is always watching.
I don’t like it when people stare at me. Babies get stared at all day long. Toddlers are watched like hawks, and preschoolers have adults watching them bathe and wiping their asses. Even some older kids are being watched with open door playdates, limited outside alone play, and supervised computer sessions.

9. Your treasures keep disappearing.
Kids work their asses off at school to create the perfect Easter Bunny from paper plates, only to have them disappear the day after Easter. An awesome cardboard box gets played with for a mere 72 hours, and it’s sent to the curb with the recycling. Any kid will tell you, art and cardboard belong in the middle of the living room floor, not out with the trash.

10. No booze.
Younger kids don’t know what they are missing out with this one yet. They are just sitting there, happily slurping their watered down juice. Older kids sometimes get into the liquor cabinet a little too early and don’t know how to do handle it properly. This one is better left to grown ups, which is why I’m glad I am one. Plus it makes paying the bills and doing all the work worth it, doesn’t it? 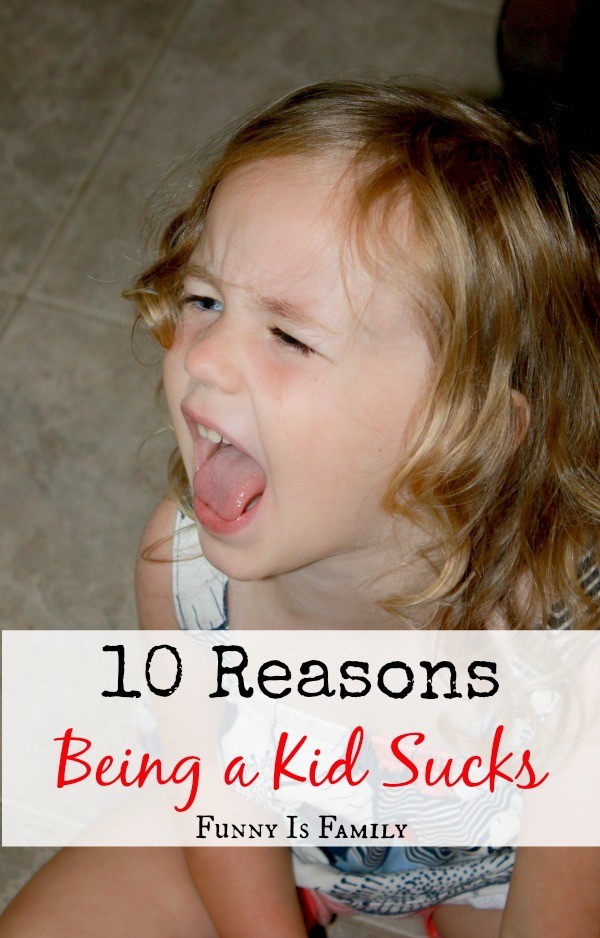 8 thoughts on “10 Reasons Being a Kid Sucks”