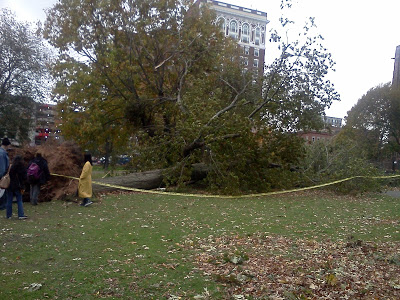 Sometimes the past shows up in unexpected places. Yesterday we spent the day in New Haven, CT doing some sight seeing, and we came upon this downed tree in the New Haven Green. The tree is called The Lincoln Oak, as it was planted in 1909 to celebrate the 100th anniversary of Abraham Lincoln’s birth.
We were checking out the huge hole left in the ground from the uprooted tree, when a man approached us saying a skull had just been discovered stuck in the root system. He was concerned we may not want the kids to witness a body. He was right. We didn’t want the kids to see, but I sure as hell wanted to take a closer look.
Part of the Green was used as a cemetery for early New Haven residents, and in 1821 the grave markers were moved, but the bodies were left behind. The bones that we saw appeared to have been there a very long time.  I was glad to read this morning that the body is being exhumed by professionals, and while we will probably never know who it belonged to, it is being treated with respect.
It was a somber reminder yesterday that history is all around us. We carry it with us, often times without even realizing it.
Read the New Haven Independent story here .