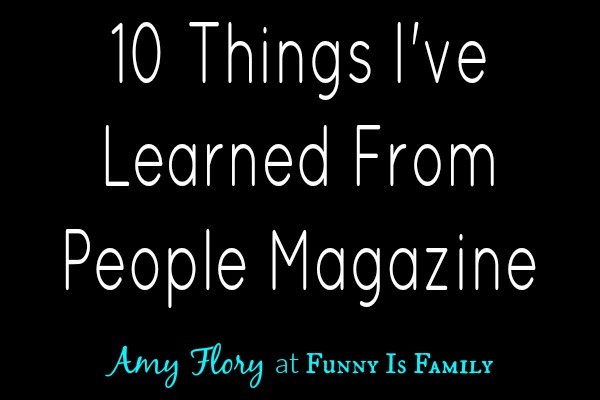 10. An “onlooker,” “insider,” and “gal pal” are all people with much to say. I’m not sure why famous people still hang out with these guys and tell them things. Those three bitches gossip like crazy.

9. Three weeks is plenty of time to decide to get married, and a three year engagement is also appropriate. For marriage number one or marriage number eight. Better spend a crap ton of money on that wedding, though, if you want people (and People) to take it seriously.

8. Childhood celebrities get a bad rap. The most important ingredient in the “future drug addict” cocktail is a pair of train wreck parents. I’m looking at you, Lohans and Culkins. Natalie Portman, Danica McKellar, and Joseph Gordon-Levitt all worked as child actors and are productive adults. For every River Phoenix, there is a Reese Witherspoon, Ron Howard, Dakota Fanning, Shirley Temple Black, Neil Patrick Harris…

7. Celebrities have lots of houses because they need lots of closets to hold their many handbags. How they can switch bags so frequently and still find anything is incredible to me. The only thing that manages to make it into every bag I use is broken granola bars and random Lego pieces.

6. Pretty couples don’t always make pretty babies. Particularly when the daughters take after dad. Can you imagine how disappointing it would be to look like a supermodel and birth a daughter who looks just like the square jaw that will be your ex in a few short years?

5. There are about 468 types of mascara. They are all amazing and if purchased will make your lashes four feet long.

4. Celebrities pretty much only read non-fiction. Just ask them!

3. J Lo has the absolute worst taste in men. Even Ben Affleck, who used to be number one on my laminated celebrity list, but is now a head-shaking, “what a shame” disappointment.

2. work as a backup dancer or celebrity bodyguard, you can bang any celebrity you want. Fish in a barrel, people.

1. Those crossword puzzles are a real ego boost.