In our house, Halloween costume planning takes time. I start laying the costume groundwork in the summer, as my vision and the kids’ visions are vastly different. If they had their way, every year I would be escorting a superhero and a princess to every house in the neighborhood. I know there come a time when my gentle prodding and not so veiled suggestions won’t be enough to dissuade them from the costume of their choice, and I can only hope they have some taste when that day comes.

You may be thinking, “What the hell? Her kids can’t pick their own Halloween costumes?” Let me assure you, my kids have loved every costume they have ever adorned to parade around at school and to mooch candy from the neighbors. (Except for Lily’s first Halloween. She looked so adorable as a monkey, but she hated the hood of that costume with a passion usually reserved for cold baths.) Not only do they love their costumes, but the grown ups dishing out the candy do, too.
My other reasons  for choosing costumes are practical. Every superhero costume comes with a mask. The mask makes the costume. If they get to dress up at school, they can’t wear the mask. What’s the point? Also, the princess costumes are thin and flimsy. Halloween is in damn near November. In fact, last year we waded through snow in a power outage to trick-or-treat. I prefer a costume with a little more material, or at least something that looks cute with a full outfit layered underneath. Besides, we have enough dress up clothes, the kids can be princesses and superheroes every other day of the year. 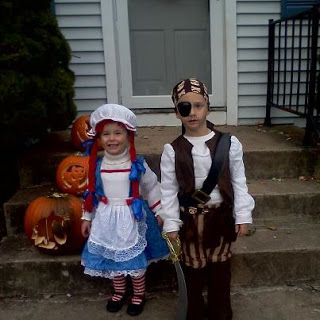 Now, I don’t dictate what they will be for Halloween. It’s a compromise, and since my negotiating skills are better, it always falls more my way. This year, Graham mostly picked his own costume. He will be going as Harry Potter, and it’s going to be awesome. We’ve read the first book, seen the first movie, and just started the second book. Lily will be going as Hermione, although she still thinks she’s going to be a princess. We have lots of time to sell her on the witch costume. One of The Doctor’s sisters sponsors the kids Halloween costumes, and that girl is a planner. We’ve been discussing this year’s costumes for close to a month, and they have been ordered, accessories and all. The costumes should be here any day, and when they arrive, we’ll try them on, heap the praise and compliments on real thick, then put those costumes up where the kids can admire them from afar. By the time Halloween arrives, they will both be dying to put those Hogwarts robes on.

This Halloween is going to be extra special. My in-laws will be here, as will the Halloween costume buying sister, her husband, and their toddler. We get to trick-or-treat with my adorable niece who will be a pink pig for the occasion, and my in-laws will be at the house handing out candy. They really get a kick out of seeing all of the kids, as they live in the country, and haven’t had trick-or-treaters for years. I can already taste all of the candy I’ll be stealing from the kids. With Graham’s recent cavity situation, he should put up less of a fight.

I’ve already got plans for them to be Luke Skywalker and Princess Leia next year. Stay tuned!

5 thoughts on “The Art of Halloween Costume Negotiating”